Did I mention that we were dancin’ today?

Scamp was out in the morning which gave me some time to slap some acrylic paint on a piece of corrugated cardboard. It had already been primed with a mix of green, red and blue paint yesterday. Then after a quick lunch when Scamp returned, we were off the other first and second dance class.

First class was Waltz and it was not as frantic or as difficult as the first one a fortnight ago, mainly because we’d been practising. Second class immediately afterwards was Jive and it was difficult. Much more footwork than I’d imagined. After that we just drove back home

While Scamp made the dinner, I returned to the painting and blocked in the mass of the foliage, the foreground grass and the area between that would be the trunks of some trees. After dinner (fish curry made with yesterday’s daal and a couple of pieces of smoked haddock – quite delicious) we got ready for the next lot of dancing.   Luckily it would be easy because we were helping out at beginners classes.  There were too many men as usual at the first class, so I helped out with Shannon’s beginners.  A bit of a culture shock as the moves aren’t very well explained, nor is the timing very clear, but she does make sure the basics are covered again and again and again.  I won’t say any more as I would go on for quite some time.  Next class was also a beginners class, but much more fun and no poking fun at folk who couldn’t get things right, but that’s just Jamie’s way.  A much more gentle and considerate approach.

Came home and slapped the sky in and also added the highlights on the trees and it is now up for perusal on Flickr and Instagram: 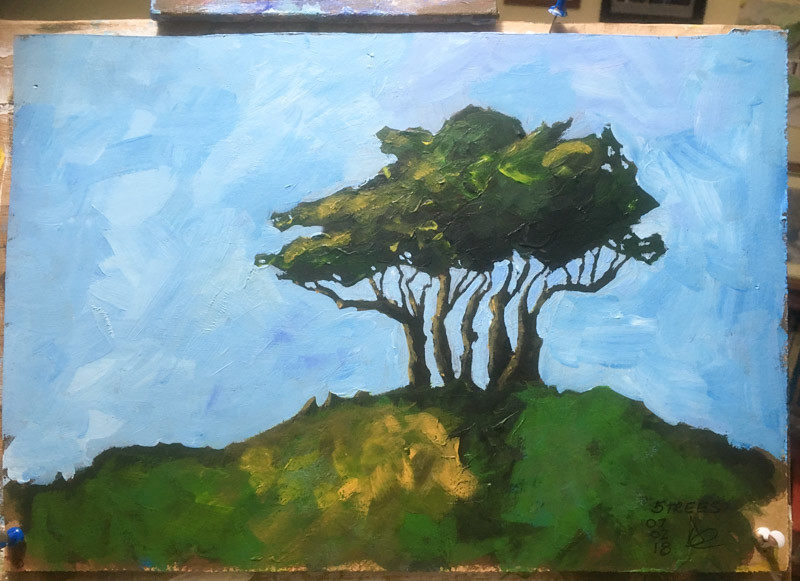 Today’s PoD was seen at Candleriggs in Glasgow.  It should spell Candleriggs Square, but someone has nicked a few of the letters.  It reminded me of the anagram round in Countdown.  “Could I have a consonant please.”

I think Scamp is off having coffee AGAIN tomorrow, so I’ll probably clean up the mess in the back room and see what’s what.  May go dancing at night!!