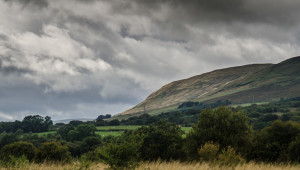 It was one of those “will I, won’t I” sort of days. Weather was threatening, but not actually doing anything about it. Eventually decided that a walk would be safer than a cycle run because the stiff westerly was going to be a headwind going out. As it happened, it didn’t rain, but the westerly continued to be problematic even when walking into it, so probably the best decision in the end. The wind did give a bit of texture to the sky but I just couldn’t catch the fleeting sun on the hills.