Well, not quite dancing on a volcano, but sailing pretty close to it.  The it in question being Stromboli at the southern tip of Italy, but let me start at the beginning.  We woke around 8.30am and went out to see the passage through the Straits of Messina again.  I make no excuses for this as it is a great sight. 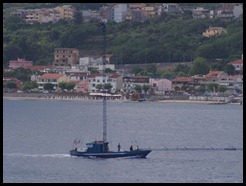 While we were there we saw the strange swordfish fishing boats with their enormous masts and crows nests where the pilot steers the boat to the shoals of swordfish.  There is also an extremely long bowsprit from which the fish are speared.  Unfortunately we never saw any actual fishing being done, but the pilots were in the crows nests steering the boats.  Scary looking stuff.  There was beautiful light on the coasts on both sides during the passage.  Lovely dramatic skies too.  We also passed the highest pylons in Europe which are now designated listed status.

Just before we went for breakfast we saw a pod of dolphins, the second we’ve seen this trip.  After breakfast I went to a talk on JMW Turner and also on some bloke who’s paintings the gallery were trying to push.  Strangely, when the talk was finished and the powerpoint closed, there was a message on the screen to the effect that this was not a legal version of windows 7.  Pirates on a ship?  How apt.  A quick walk along the deck and we were at the next talk which was about ancient Rome, but couched as a port talk would be today.  The speaker was obviously really interested in his subject, but maybe took it a bit too enthusiastically for most of the audience.

When that was done we had just started to get near to Stromboli.  We sailed right round it and were just sailing away when I saw some rocks falling down the 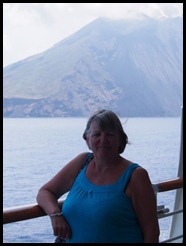 scree with clouds coming from them.  I presume these were thrown out by the only active volcano in Europe.  A really amazing and scary sight.  I don’t think I’d like to live near it.

Time for lunch, and after that it was sunbathing time, with a short interlude to watch the start of the Austrian F1 GP.  By about 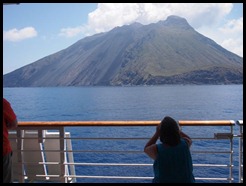 5.00pm it was getting a bit cool to sit any longer so we went back to the cabin to get ready for the last formal night of the cruise.  Watched three soul singers in the early cabaret – very good entertainment.  After that, it was the Crew Show, but it was mainly the Entertainment Team and a few of the staff, but very few.  All in all, it was a good day at sea, well filled.  I’ll probably remember it most for Stromboli and the swordfish fishing boats.