This was always going to be a busy day. We had friends coming to dinner and there was a lot to do. First thing was to make some bread. That was the easy bit. Just chuck the ingredients into the bowl of the

mixer and let it get on with it. After 10 mins of mixing, divide the dough in half. Half goes in the freezer and half gets set aside for proving (allowing it to do the initial rising). Next, get the pannacotta on the go. I’ve done it a hundred times, but this time I nearly let it boil over. Just too cocky. After that, I could relax for a while, so took the

bottles to the bottle bank – they make such a lovely sound when you smash them! Then it was time to get the photo done for today, and I decided to go to Fannyside moor to see if the bog cotton was in bloom. For once I was too early, as it was just beginning to flower, so I got some photos of moss seed heads instead. I also attempted a shot of a lonely tree, but the camera and the weather conspired against me and what I got was a shot of some dry grass stems with the tree just out of focus and distorted by the heat haze. A heat haze in Scotland, I hear you exclaim. Yes, it’s true, but perhaps today was summer. It’ll be sleet tomorrow, just you wait and see. 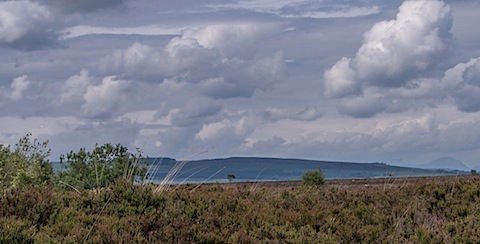 Once the photography was over, it was time to head back home to slave over a hot stove, this time it was the main course. It’s a hard life this.