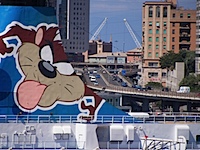 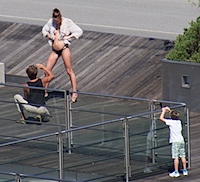 We waited until all the shore parties had left before making our way out of the ship today.  Got down the gangway to be told that the shuttle had just left.  Had a conversation with a man who had a plummy accent and had worked in Glasgow.  He didn’t actually say what he did or had done for a living, but he “had a sales manager”, so I’m guessing he was quite high up the food chain.  We talked for a while until the shuttle bus came.  The busride into town was fast, bumpy and hair raising at times.  Of course it was, we were back in Italy.  We arrived at the bus stop and were immediately set upon by taxi drivers eager to take us to Rome.  I started out saying “No, we’re not going to Rome today”, but they didn’t seem to understand that, or they weren’t interested, so I started saying random things like “No thanks, we’ve already got one” and “Hey, I’ve got a hat like that!”.  What we really needed was Murd to say something in Gaelic to them, because the first thing they say is “hello”.  When you reply, they can quickly establish what nationality you are and start their speil in that language.  Murd’s Gaelic would puzzle them I’m sure, especially with a few sweary words thrown in for good measure.  Anyway, we quickly ran the taxi gauntlet and walked into the town.

Civitavecchia is a working, industrial town, not at all given over to tourism.  It’s a bit seedy in places and not very pretty.  We walked into the main shopping area and decided that it wasn’t really going to be very interesting, so headed back to the sea front where there turned out to be a decent promenade.  Scamp loves promenades and we walked a fair distance along it.  We watched two guy practising karate or tai kwon do.  I’m not being facetious here, meaning they were fighting, no, they looked like they were performing a kata on the promenade.  Strange.  Pretty as the prom was, we decided to walk back to the bus stop and go to the ship.  We passed a wee cafe offering free Wi-Fi and stopped for a coffee and a beer.  Britain could really learn from the Europeans about using free Wi-Fi to encourage punters in to cafes. I’ve only once paid for a wireless connection and that was €3 for 60 min.  Compare that to the ship’s extortionate £1 for 2 min which equates to £30 for 60 min!  How many places in Glasgow or Embra give you truly free Wi-Fi in a cafe?  Very, very few.  So, I got connected and uploaded two days of blog with pics attached this time.  Then we headed for the bus and then back on board.

Had lunch and sunbathed for the rest of the day.  Went to the Headliners show in the theatre.  It was quite good, not excellent, just quite good.  Yes, I know, damned by faint praise, but that’s the way it is.  For me the singing is rough and strident but the dancing and choreography is great.  Couldn’t agree on what to do with the rest of the night, but as we were both yawning, it seemed that the best thing to do was to have an early night, so once this epistle is done I’m off to beddy bies.

I don’t think I’d rush back to Civitavecchia again.  It’s pretty rough around the edges, but it is what it is, just another industrial town.  To sum it up, in one shop window I saw some swiss army knives and wilderness camping gear.  Nothing unusual there I suppose although it’s getting rarer in the UK.  The next window had machetes, short hunting bows, crossbows and throwing knives.  Hmm, camping doesn’t get tougher than this.  Thought for a while I was back in Carbrain.

Oh, one last thing.  We got talking to a couple in the theatre last night and found out they came from Croy.  Then the guy let slip that they are both Rangers supporters.  In Croy?