Today is our wedding anniversary, and Scamp had booked lunch at the exclusive Rogano, so we took ourselves into Glasgow to enjoy ourselves, and that is what we did.  Great lunch with a bottle of wine, then another wee drink in the Counting House.  As Scamp said, it was like both ends of the scale of food and drink in Glasgow, but both have their place and both were enjoyed.  Needless to say, we were travelling by public transport to avoid the depredations of the Scottish government Don’t Drink and Drive policy!

SNP, we take the fun out of everything.

I travelled light today with only my ancient TZ3 in my pocket.  I’d forgotten just how much use I make of RAW files.  The old TZ3, despite being a great camera with a sharp lens, doesn’t shoot in RAW and that fat was brought out in no mean terms when I post-processed today’s shots. Loads of grain after dragging detail from the shadow areas and that is with an ISO 100 setting.  Partly this is due to the small sensor and partly it is due to the lack of RAW storage.  Still a good camera, but with limitations. 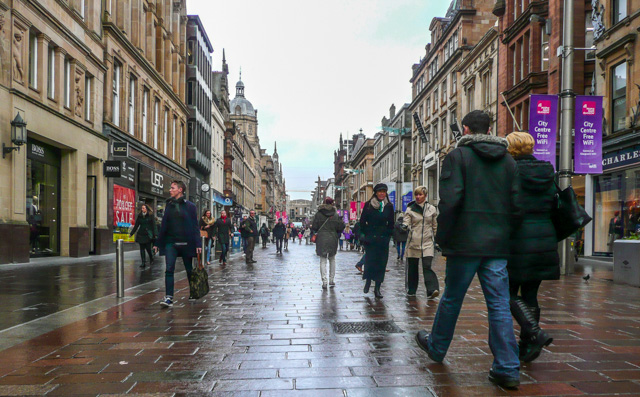 Bucky Street in Glasgow (Not its real name, so don’t go looking for it) on a cold, dreich day.  Not as dull as it looks here, but still nowhere as good as yesterday.