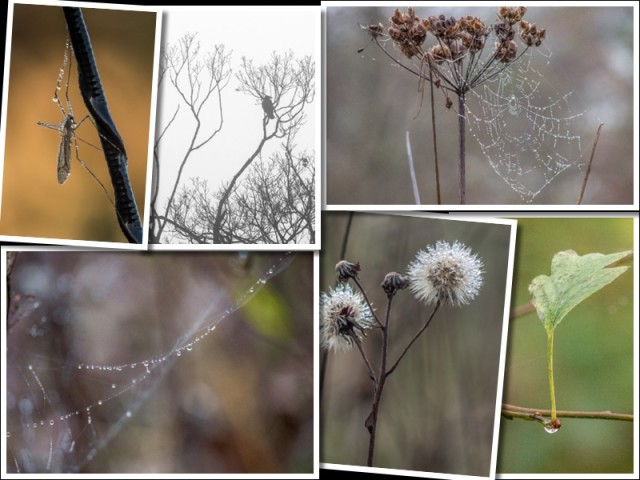 I started today by putting what might be the finishing touches to the oil I started yesterday.  It looks better, but still not exactly what I wanted it to be.  Time, as they say, will tell.  For now, I’m happy with my first ‘real’ oil in years.

I’d decided last night to do the gym/swim thing today and for once, I stuck to my guns and went – early – before 9.00.  That early.  When I got to the car there was a poor wee jenny long legs stuck to the aerial (Top left in the mosaic), covered in droplets of dew or it might have been dampness from the early morning fog that was just lifting.

I’m getting used to the upper body machines at the gym, they’re no longer torture devices, or maybe I’m just not doing it right 😉  Gym was very busy, so I might not go this early again.  The dreaded WaterBabies were in the pool with their singing teacher.  I think that’s why I cut my swimming short and soaked up some heat in the sauna.

Came home and had breakfast.  Yes, painting and then exercising BEFORE BREAKFAST.  This is the start of my new regime.  It’ll last until Friday … maybe.  After my late breakfast, I drove to Auchinstarry and walked the railway.  I left the house in sunshine and parked at Auchinstarry in cold fog.  I’d brought a body warmer instead of a fleece.  Bad move.  Literally hundreds of folk with their over-excited dugs were walking the railway today.  I did manage to get some moody shots in the varying densities of fog.  Saw a jay.  Don’t ever remember seeing one here before.  I remember seeing one down at Hazy’s a year or so ago, but never this far north.  By the time I got back to the car I was feeling quite chilled.  Drove home and it was back to sunshine again.  That’s Scotland for you.  Two completely different climates within a couple of miles of one another.