The first day in the gym after a fortnight stuffing our faces on the cruise. 30 minutes in the gym then a swim to relax. Best bit was the sauna and the jacuzzi. Who would have thought that just two weeks could have had such an effect. Even earlier, I had a hospital appointment to check for an abdominal aortic aneurysm (AAA), but it was all clear, thank goodness. We had our usual salsa class at night and it just 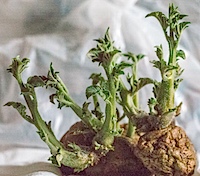 added to the exhaustion. As for the rest of the day, I have no idea where it went, other than I took some photos of the shooting seed potatoes as a POD. Oh, yes, and I put another batch of photos on Flickr. I think it will take the remainder of the week for us to recover. I aim to have a less stressful day tomorrow when the weather, according to the magic weather fairies, is to be fair and sunny. We’ll see.