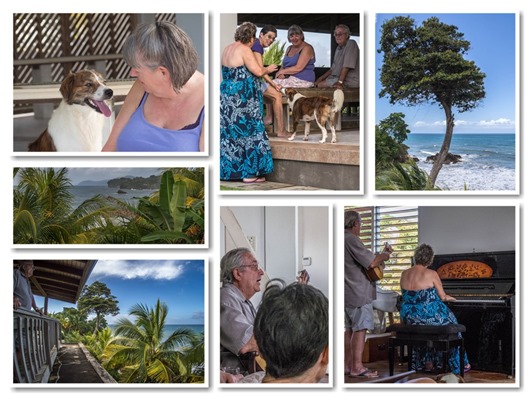 This morning after breakfast we drove to Blanchisseuse which is in the north west of the island.  The road was rocky and rolly in places, but the scenery was quite amazing. After an hour and a half of hard driving we reached Yves’ house at Blanchisseuse.

It really is an amazing place.  A beautifully designed building shaped like a hexagon on plan and with lots of windows open to the sea air.  Adjoining it is the most enormous model train layout you’ve ever seen.  Originally the train tracks ran round the garden supported on concrete pillars.  Now they have their own outhouse and to give you an idea of scale, the bends at each end or the track are 7 foot radius.  It’s a Gauge 1 track built for coal fired steam locomotives.  I didn’t get to see it in operation, but it must be some sight.  We had a Heineken beer when we arrived or Green Tea as Yves called it.  Scamp and Madeleine had a Bentley which is a mix of lime juice and bitters.  After refreshments, we sat looking out to the wild rolling sea and it was wild and it was rolling.  So much so that the walk along the beach had to be cancelled on account of there being no beach!  The rollers were thudding in against the rocks.  Still there was a blue sky and it was hot.

Lunch was next served by his housekeeper’s son, Sheldon.  Eight of us sitting at the table eating Chicken Pilau and discussing Trump’s latest atrocities.  Quite incongruous to think that we are sitting here on the edge of paradise discussing the vagaries of a buffoon.  Fruit salad for dessert was fresh and lovely.

Then the music started.  Yves’ wife played the piano and then Scamp played.  Jaime played the Quatro (a Venezuelan four stringed guitar) and sang in Spanish.  Then the pianists competition started.  I can’t describe it as anything else.  With the two pianists, it was just a case of who could play the best, most obscure and most difficult pieces.  I get bored with competitions really quickly and I went and took a few more photos.

When we finally left about 7pm it was dark and Jaime opted to drive.  The drive up had been scenic, but tough going.  In the dark it was just tough.  I don’t think I’ll forget the sight of little white flat-bed Hiace vans parked at the side of the road – lights off in total darkness with a man lounging in the back miles from anywhere.  What were they waiting for?  Why were they there?  The mind boggles.

Anyway, we made it back home and I think all of us were totally exhausted, so we went to bed early.