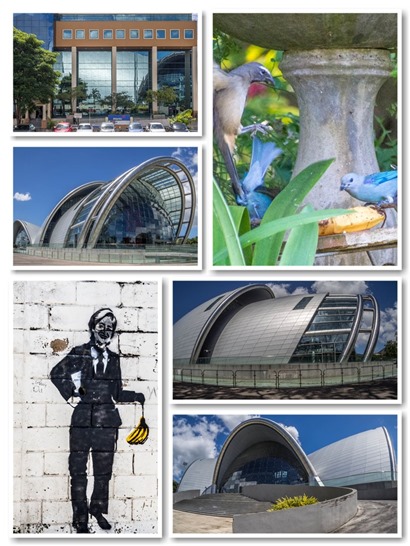 Today we were going to the big outdoor market in Port of Spain, but when we got there it was closed.  After checking Madeleine found out that it’s closed every Monday.  Not to worry, we could go to the museum.  After we got parked, we walked to the museum, only to find that it was closed too.  So we drove back to the house and after a snooze, we had lunch which was salt fish cooked with peppers and onions.  This was served with black beans, kidney beans, fried plantain and avocado.  Finished off with coconut ice cream.

The rest of the afternoon was catching up with Flickr and blog posts.

Before dinner, I managed to get a sketch finished.  The first one on the new Moleskine sketchbook, well, the first one I’m willing to publish.  It’s a bit late for week 4 in my sketch a day pledge, but it’s finished and I’m fairly happy with it.

Before dinner and just as the sun was setting we all went for a fast walk around Diego Martin.  While we were out we saw a Zumba or Salsercise group doing their workout in a basketball court.  It looked just like our Monday night warm-up before class.  We were doing our own workout, climbing a steep hill twice.  I was amazed at the number of folk of all ages out getting their exercise in the gloaming.

Tonight was the last practise night for the Steel Pan bands before tomorrow’s competition, so around 10pm we set out to listen to them.  After a couple of wrong turns finding smaller bands practising short pieces, we found the Pan Yard where last year’s champions, The Silver Stars were going through their routine.  I don’t know what I expected, but it wasn’t over sixty men and women hammering out an amazing rhythm on steel pans.  The sound was incredible.  If I hadn’t seen it, I would have thought it was purely electronic music I was listening to. For someone who has only heard Caribbean steel bands on TV, this was a game changer.  Jaime is right, it’s impossible to record this music in a studio.  It’s one of those sounds that can only be appreciated in the open air. Truly an unforgettable experience.