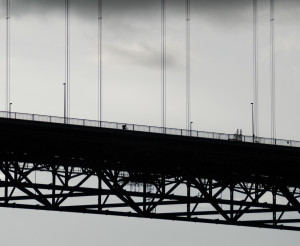 We went out with all the visitors to Inchcolm Island in the Forth Estuary. Unlike last time, the weather was kind to us with very little wind and no rain. Spent the afternoon walking round the east of the island after we had investigated the priory. It’s so much nicer to be on Historic Scotland sites where you are encouraged to look, touch and photograph to your heart’s content. Things are so different in National (dis)Trust, with it’s matronly don’t touch, can’t go there, cordoned off ‘treasures’. We were even told in Culross that we couldn’t photograph inside one of the buildings because photographs damaged the fabric of the rooms! What? Did the photograph steal its soul? Anyway, I digress as usual. The only problem with the trip was that, as usual, the boat was late coming to take us off the island. Half an hour late. We were a bit concerned that the car park at North Queensferry would be closed by the time we disembarked. Not to worry, it was still open.

I saw this opportunity when we sailed under the Forth Road Bridge. You don’t appreciate the scale of these constructions until you see a person, or in this case a cyclist on the top.

All in all a great day. Not so for one unfortunate person who parked their car on the slipway and found it half submerged when they got back.