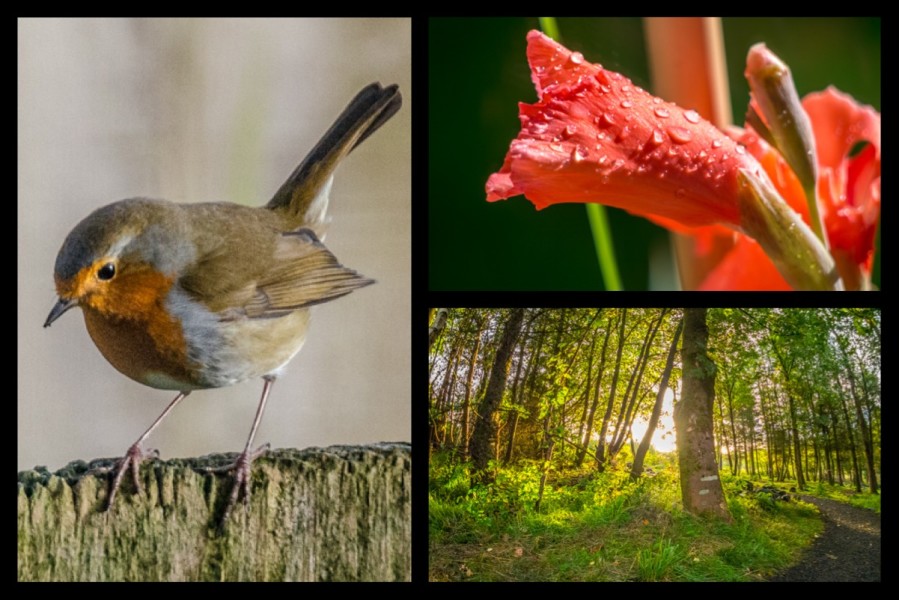 When I woke up at about 6.50 it was dull wet and dark. I dozed for 15 minutes or so and then the sun was up and the streets were drying, so I got dressed and walked over to St Mo’s. The clouds rolled in, the rain returned and there wasn’t enough light to get decent shots without resorting to really high ISO settings like ISO 25600! I got the shots, but the grain/noise was intrusive. It was either that or lug a heavy tripod with me through the trees. That wasn’t going to happen. Maybe I’ll take my monopod/walking pole with me next time. It’s not as stable as a tripod, but it’s not as heavy either. It might be worth a try. I’ll let you know.

I came home almost empty handed. Some shots with the 9mm lens were good. Nothing really good from the Nikon. Almost everything I’ve shot with the 9mm lens has been good for one reason or another. I’m still really surprised with the sharpness of the lens. However one of its big failing points is flare. Because the angle it covers is so large (140º) it is difficult to exclude the sun. Also, as there is no way to add a lens hood, flare artefacts find their way into any picture shot into the sun, or even near the sun. I’ve yet to find a way to avoid this. The other bugbear is Chromatic Aberrations. CAs are bright coloured fringes that appear in areas of high contrast. They appear as purple or green areas at the edge of a dark subject. Green at one side and purple at the other. Most wide and super-wide angle lenses, especially the cheaper variety suffer from CAs to a greater or lesser extent. Lightroom controls them really well and I’ve got an input filter set up especially to deal with them. It’s not a big problem, but it is a nuisance. When I was making my breakfast I noticed a robin sitting on the back fence. The rain had turned its tap off and the sun was back giving low directional light that lit up the robin beautifully. Quickly grabbed the Nikon and got three frames before the bird flew off. Well, that’s at least one in the bag. Later in the day the sun had moved round to the front and was lighting up the last remaining gladiolus with rain drops glistening on its flower. Another grab shot and that’s two in the bag. After that the light died away and the show was over for today.

Later I spent about two hours trying with little success to install a decent keyboard into my Android ‘bike phone’. Eventually found a way to install apps onto the SD card rather than the phone memory. Such a faff. You’d think Microsoft had invented Android not Google, although it never once said ‘not responding’, so I guess they couldn’t have.

Note to self:- Try out the monopod tomorrow.

If you find it difficult to see the detail in the pics today, either click on the mosaic or go here.  All rights reserved and all photos copyright of D. Campbell (that’s me).