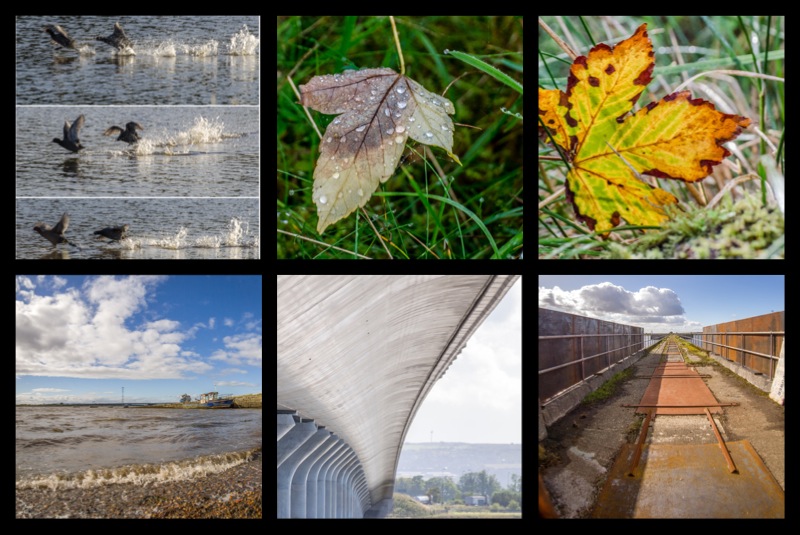 It’s 7.45 at St Mo’s and I’ve just startled a deer. Didn’t expect to see one to be honest and certainly not this early into a walk. The lovely sunrise got me out early and I’m glad it did. Oh well, no photos of any import yet, but we’ll see what turns up.
Just caught another glimpse of the deer but camera wasn’t switched on because the battery is low. It’s switched on now!
I’m glad I’m recording this because I just saw a fox running ahead of me, despite my clumsy footsteps. On the way home I stopped to watch two coots playing Chase-Me across the pond. I don’t suppose they were really playing, it was probably a really serious business, but it did give me the chance to grab a few interesting frames. A busy early morning walk then, but few decent photos to show for it. (Top three on the mosaic)

That was earlier. In the afternoon, Scamp wanted to go somewhere for a walk, so we took ourselves off the Kincardine for a walk along the Forth. Walked as far as the new Clacks bridge. I always think of Terry Pratchett when I hear the Clacks bridge mentioned. Sounds like his version of mobile phone masts. Took a few photos along the way, quite a few actually, well, just over 90. Mind you, these have been swiftly pared down to 42 which Hitchhikers amongst you will recognise as the “Answer to the Ultimate Question of Life, The Universe, and Everything” in Douglas Adams’ book. Quite a literary blog post this is turning out to be. One more for the road then. This from Robin Sloan’s book Mr Penumbra’s 24-hour Bookstore: “Neel buys a round of drinks. I sip something called the Blue Screen of Death, which is in fact neon-blue, with a bright LED winking inside one of the ice cubes.” A brilliant book for the computer nerd, like me. By the way, the group are staying at the North-bridge hotel! Getit? Hazy will, JIC may not 😉
Ok, that’s it for the literary section, back to the normal blog stuff of painting, photography and moans.

I tried the monopod this morning but it didn’t make much difference with the Nikon. I forgot that you can’t use a tripod (or a monopod I suppose) with the vibration control on the Tamron. It actually increases shake rather than reducing it. 🙁 I did try turning the VC off and using the camera with the monopod then, but I still wasn’t impressed. Actually, I’m becoming more and more impressed with the Oly and m4/3 (micro four thirds) in general, and less with the Nikon. I know I’ll change my mind about the two systems, I always do.

A day that had started out with a beautiful sunrise ended with heavy clouds and just the hint or rain. On our walk along the Forth the wind was really quite cold but the sun was warm. When we were near the Clacks bridge there was a wall on the riverside which protected us from the wind and that’s when we felt the warmth of the sun. For the rest of the walk the wind was very cooling.  (Bottom three on the mosaic)

I realise it’s a bit difficult to see the detail in the pics today, but either click on the mosaic or go here.  All rights reserved and all photos copyright of D. Campbell (that’s me).