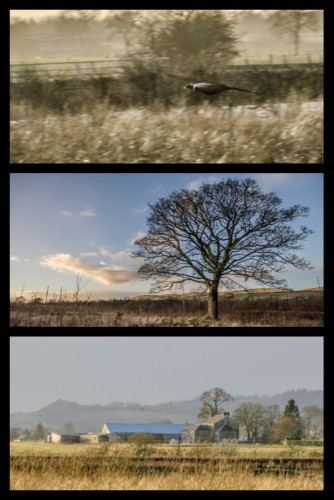 Today announced itself with sun coming through the window, no wind and no rain. What a difference from last night.

After tidying up after yesterday and Friday, Scamp settled down to catch up on the TV she’d missed and I pulled on my boots and went out for a walk in this welcome break from the stormy (I’m not going to mention ‘D’ – You know who) weather. Got a walk along the old railway. The Kelvin Burn which becomes the River Kelvin a few miles downstream was very high, as you might imagine after the unremitting deluge of the past week or so. Unlike the last time the burn was high, this time I chose my route with care and avoided wet feet.

At Dumbreck Marshes I managed a pen and ink sketch of a farm a far distance away. While I was attempting to get a record shot of the farm and was watching the light change on it and the field in front, I caught sight of a cock pheasant gliding over the field. I just managed to grab one shot of it and not the best view of the bird either. By the time I reacted it had passed into the area in direct sunlight. Also, as the sun was low, the light was and orange/brown colour and the combination of the two meant the colour was all but drained from the shot. Such a pity.

Walked back to the car, passing a group of ‘real’ walkers, complete with nice clean jackets, rucksacks, walking poles, expensive boots and even gaiters. Oh I wish I was a real walker.