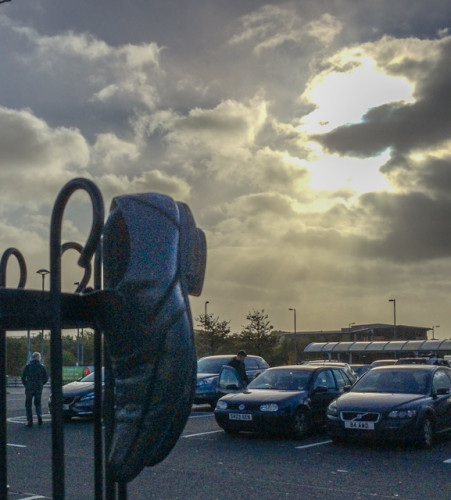 Today I made some bread. I made the bread. I didn’t just pour some flour, yeast, salt, butter and water into the mixer bowl and switch the mixer on. No, I mixed the ingredients by hand and then kneaded the dough by hand until I got a springy dough. I then proved it for a couple of hours before knocking back and proving for a second time for another couple of hours. In those couple of hours Scamp and I left it to its own devices and went out for a cup of coffee and a wander round the shops.

While we were out, I saw today’s pic and stripped the back protective film from the back of the iPhone (now christened “Mambo No 5” – Google it!) and it took its first ‘real‘ shot. I thought it handled the contre-jour (backlighting) very well. Impressed so far with the camera. While we were in ASDA, I wanted to Google something and found that I was connected to 4G. IN ASDA? JIC, I was even more impressed than I was with the camera.

When we got home, the bread (remember the bread) was looking good so I fired up the oven and when it was good and hot, I baked an exceptional loaf. Much better than Monday’s. I think it was my manual skills that made the better bread. It must have been, because the iPhone was off all the time.

Now that I’ve settled on Mambo No 5 as my new phone, the iPhone 4 is somewhat redundant. I’ve checked and I won’t get much money for it, so I’m hoping to unlock it and use it as a spare. Now in contact with the Vodies who are processing my request as we speak. Oh, yes, and I got a text from them telling me that they are sending my Vodafone order by Royal Mail. Is this a new iPhone 6s? I certainly hope so 😉