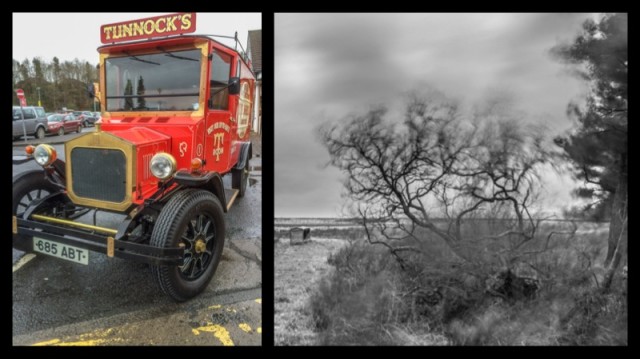 Today was Scamp’s annual Christmas party when she cooks dinner and entertains her ‘Witches’.  The planning usually starts about a month before the party and so it was this year.  I try to make myself scarse on these days, but today the weather was continuing on its December theme and I stayed home to help with the preparations.  After I’d done all that I was asked to do, I went to the leisure centre for a swim.  Just like the last time, the water in the pool was lovely and warm, the sauna was hot and the steam room was steamy.  Just what you want on a cold, dull, miserable day.  I spent a pleasant hour in the heat, reminiscent of our recent holiday in Tenerife.

After heat of the pool, I took myself off to Fannyside to try for some long exposure shots of the trees blowing in the winds of Storm Desmond.  What on earth gave them the idea of giving our ‘storms’ names?  In global terms they are just a bit of wind, not a real storm like those in the tropics.  What my mum would have called ‘a good drying day for the washing’.  If you’re going to give them names, give them seriously dangerous names.  Not ‘ Desmond’.  With apologies to all the Desmonds out there, it’s not a scary sounding name is it?  Why give it a person’s name?  Give it an animal’s name.  Storm Tiger, Storm Orca or Storm Eagle sound better.  Storm Demond is about as scary as Storm Fluffy Bunny.

Anyway, the light was dropping away at a serious rate by the time I got to Fannyside and the wind was getting up.  Desmond was doing his best to show his bluster which was just what I wanted.  Tried a few shots using slow shutter speed and high aperture, then tried another few with the same camera settings, but took multiple images that I hoped to later combine in Photoshop.  The first shots were the best, the multiple images didn’t quite cut it as far as controlled exposure.  I need more practise in this stuff.

Just now I’m happily sitting in the ‘painting room’ listening to some music and avoiding the hilarity of the ‘witches’ downstairs.  It’s only one day a year after all.

What do my audience think of the ‘combo’ shots at the top of these epistles?  They’re easier to format than individual shots, but also give you the opportunity to link to the bigger versions on Flickr.  Answers on the comment form below please or I’ll pester you with a Surveymonkey form.