The great thing about satnavs is that they will get you out of a hole.  The bad thing about them is that they have a CPU, not a brain.  I was driving to get coffee beans and Thomsons over on the south side of Glasgow following my satnav.  I got as far as Stow college on the motorway and the CITRAC signs lit up with notification of an accident and all three lanes stopped.  I crawled along and came off at the first turn off then relied on the satnav to get me out of a jam, a traffic jam.  Well, it did the job, it got me to my destination, but it took the most circuitous route possible.  Coming back, it tried to do the same route, but it couldn’t see the sign at the roundabout pointing the way to the motorway heading home – I did.  Once it had recalculated it showed me the way home.  Great tools, but no brains.

Coffee.  It’s one of my guilty pleasures.  So much so that I got two coffee related prezzies yesterday.  A coffee grinder and a coffee freddo maker.  Unfortunately I ground up all my coffee beans to make the freddo – which tasted great by the way.  I’m going to have it over ice at the weekend!  Anyway, I needed more coffee beans and as I usually get them from the Bean Shop in Perth, I needed a supplier a bit nearer to home.  Then I remembered seeing that Thompsons coffee roasters had a shop on the south side of Glasgow.  It’s a blast from the past.  Many, many moons ago Thomsons had a shop in Glasgow city centre.  Now its in an industrial unit, but the good news is the coffee is just as good as it was, way back then. 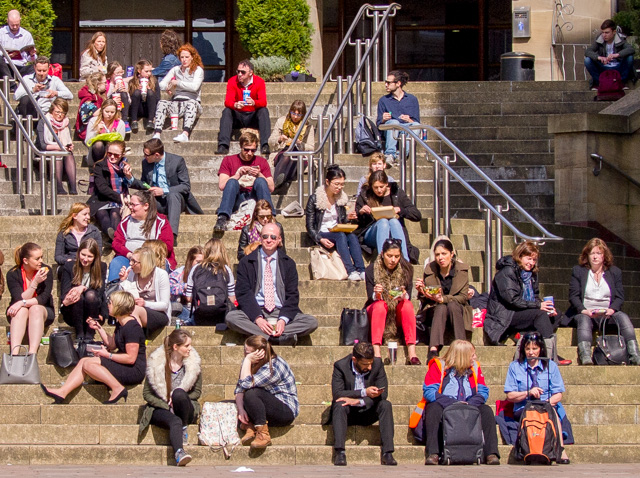 The steps of the concert hall and Glasgow City Council is considering (read “have decided to”) knocking down these steps to extend the ‘retail opportunities’ of the area.  Don’t these witless wonders realise that they are supposed to serve the people, not themselves? 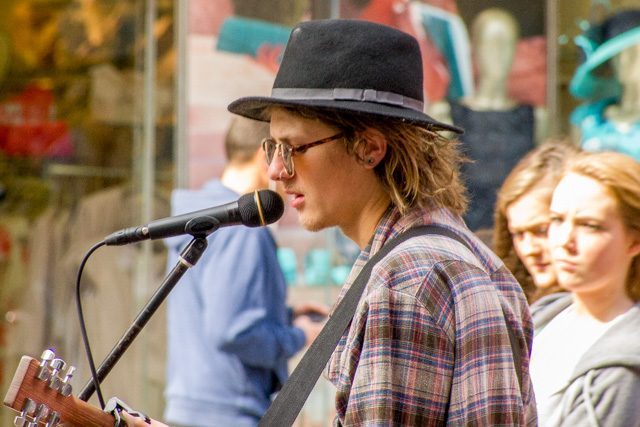 Busker basking in the sun on Bucky Street today.