Woke again to sunshine and to Scamp phoning in to say she wasn’t going in to work.  I’m amazed her office has modern communication like telephones.  They do have computers, but are in the throes of changing over from XP.  The don’t even have email communication with the outside world.  Anyway, at last she’s seeing sense and putting herself first, before work.

Lazy sort of day.  Had to have my eyes photographed at the retinopathy clinic and had to rely on public transport because I might have had drops in my eyes to dilate the pupils  Didn’t have drops, but I did see a couple of ex-pupils (joke).

Scamp decided to forego salsa tonight, which was a good idea as she’s not quite over this cold yet.  Getting better though, better than yesterday.

Today’s photo is a bit of a mashup.  It’s difficult to get both birds looking in the right direction at the same time, so I took the liberty of using Potatoshop to take the sparrow from one shot and add it, subtly, to the photo of the bluetit and the feeder.  I think it was a jolly good job.  Think yourselves lucky I admit this here.  On Flickr I just infer it was my skill at bird-ography. 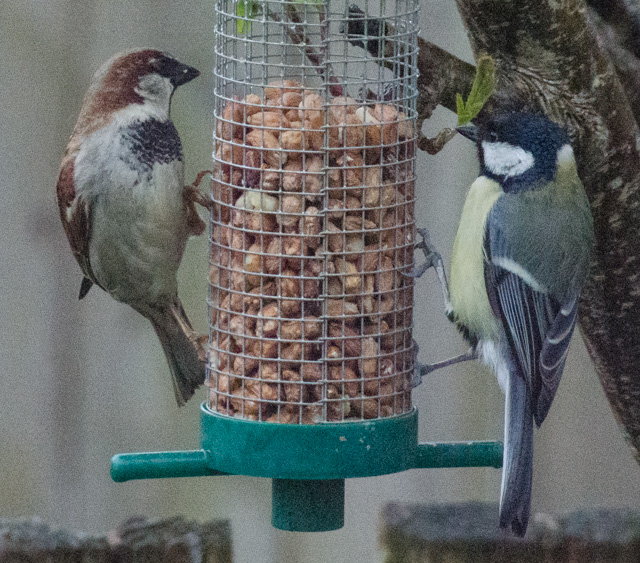 There was a queue of five birds waiting for their turn at the peanuts today.  It was a really dull day with occasional snow showers.  In late April?!  Taken through the kitchen window.  The ISO was 12800 and that’s not because the window was dirty!  That’s how low the light was.