It was decided that we go for a walk this Sunday morning and it was further decided that we go to Mugdock park.  Fine, it had been a long time since we’d been there and although it as a bit of a boring walk, there were certainly some photo opportunities, so off we went.  Got there to find there was an ‘event’ on.  Nothing surprising as there is usually an ‘event’ on almost every Sunday.  Of course the carparks were full.  Why don’t they make more carparks?  It’s not as if they don’t have the room.  The place is ginormous!  Anyway, we drove past the visitor centre and found a new, almost empty carpark on the far side of the park.  Had an interesting walk along to the castle.  On the way we passed what turned out to be the remains of WW2 anti-aircraft gun emplacements.  It’s amazing what you find out when you go for a walk.

On the way back, we found that the ‘event’ people were leaving the main carpark and a host of others were arriving, but as the carpark had overflowed on to the verge of the road, we now had potential two way traffic on a single track road.  It would seem that the idiots (not) coming and (not) going along this stretch had never been to Skye and therefore did not understand the queuing system or the concept of ‘passing places’, so resorted to getting out of their cars and shouting at each other, which was productive.  Hmm townies!  What can you do with them?  A good walk almost wasted.  It did give me an opportunity to use my extensive expletive collection and have a good laugh at the welly wearing idiots, though, so not entirely wasted. 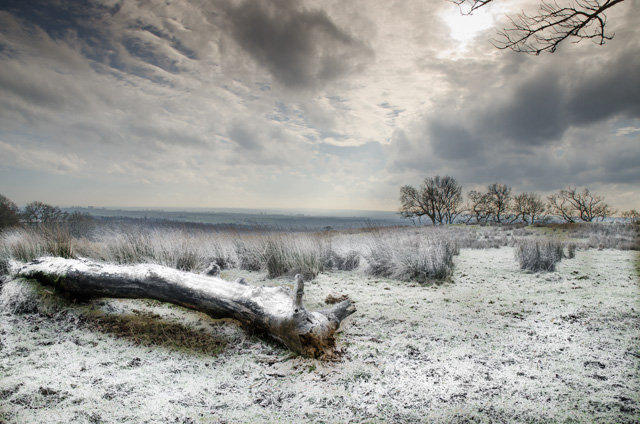 Mugdock park.  Snow on the ground.  That is to say, a ‘snow’ brush was used on the ground to make pretend snow.  Then I used a tinted graduated filter on the sky to give it that creamy snow laden look.  I was quite impressed with the overall effect. 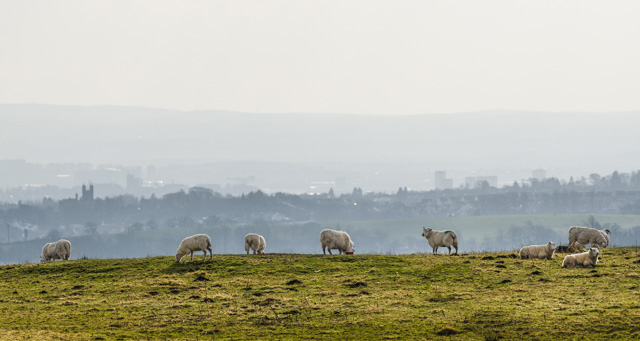 Looking over Glasgow from Mugdock Country Park.  A bracing walk on a Sunday morning.  Some of the sheepy mehs were surgically removed with SnapHeal Pro (what Lightroom’s spot removal should have been) and the foreground lightened and Clarified with a custom brush in Lightroom.  I liked the layers of the city in the background.  It reminded me of an early attempt at digital painting Jim Cochrane the art teacher showed me ages ago, in another lifetime.