Another sunny day.  Got the train in to Glasgow and did a bit of shopping.  Saw a battle between the Bastard Drummers and the Bowie / Bolan bloke on Argyle Street.  I think it ended up as a draw, mainly because they are both crap.  The BDs are totally devoid of any talent.  Ok, the pipers are quite good and at least they musical, but the drummers?  What do they do apart from dance around, battering the drums and grimacing as if they are doing something incredibly difficult and skilful.  It’s not.  On the other hand, BB just makes Bolan faces when he’s singing T-Rex stuff, but sounds nothing like Bowie.  Maybe he need a piper to help him out.

Bucky Street seems to be awash with weans, and I mean young weans, busking these days, especially during the school holidays.  To my mind, this is simply exploitation.  How any sensible parent can push their progeny to sing and play for public amusement just to make a few bob for them – the parents – is beyond me.  Three of them were in evidence today with their wee painted cardboard signs and each of them had a crowd watching, filming and photographing them.  Do the parent not care where those films and photographs are going?  If they’re lucky, the vids will end up on YouTube or Vimeo, if they’re unlucky …. I avoid them at all cost and never, ever, photograph them.  Adults are fair game, children are not. 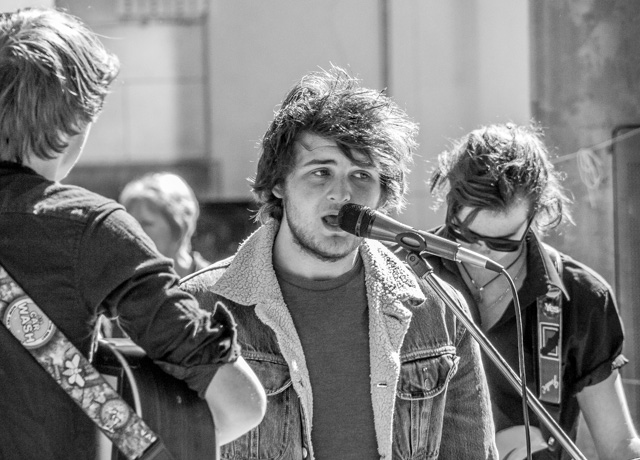 Saw this group busking in Buchanan Street in Glasgow this afternoon.  Can’t say whether they were good or not.  That’s one of the benefits of wearing over-ear headphones, you can cut out the extraneous noise.  Heavens, they even cut out the noise from the Bastard Drummers.  They are really good – the headphones, not the BDs or this lot!