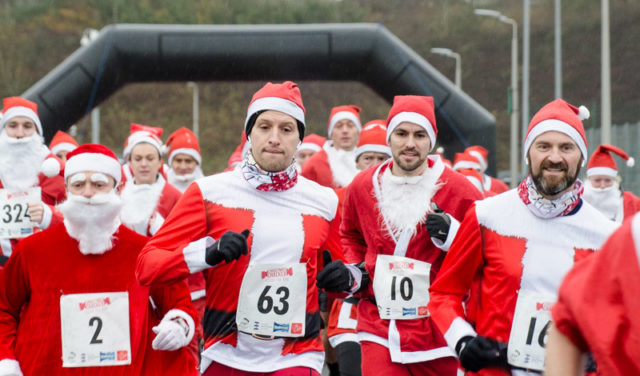 Went for a walk, took lots of photos and made a loaf, all in the morning.

Up and our just after 10am to go and see the annual Santa Dash at Broadwood Stadium. Found our way through the new estate of chicken boxes built on what once was the BMX track. It cut a big chunk off the walk to the stadium. Lovely wee houses with the emphasis on wee!

Over 300 runners, most of them dressed as Santa and one dressed as a cow for some reason. Around fifty volunteer helpers, First aiders and NLC staff in attendance and probably nearly ten spectators, because it was raining. What a shame. We did our bit, cheering and applauding the runners and taking photos. We watched the runners for about half an hour or more and then made our wet way back home.

Scamp’s Christmas party for Gems is on tomorrow, and she’d asked me to bake a loaf. I’d half intended making a plait of rye bread, white bread and seeded bread dough, but finally settled for a mix of rye, white and seeded flours instead. The loaf looks good, but we’ll wait until tomorrow to test it.

We Skyped the 40 year old, Hazy after dinner. She seemed to be having a relaxed birthday and we talked for a while about this and that, but Hazy is Forty! How did the happen? Where did the time go?

That was the end of our busy day where almost everything happened in the morning, hence the lopsidedness.

Tomorrow, after we get the living room ‘Dysonned’, the table set and all the goodies prepared, I’ll make a hasty exit … anywhere!