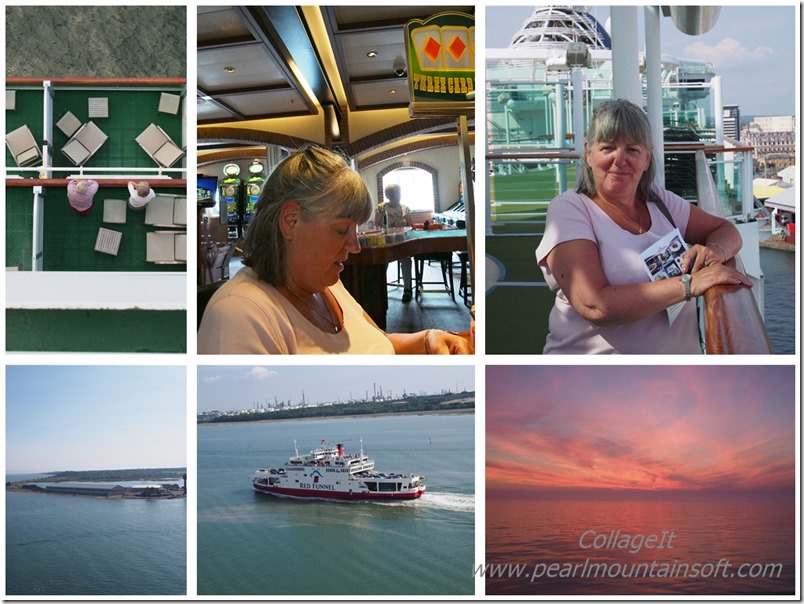 4.15am. I didn’t think such a time existed, but here we are sitting in a bus of grey hairs ready to head off for Southampton in search of more sun now that ours looks as if it will soon be in short supply. I just hope we don’t have to wait for anyone who has made a last minute decision to stay at home and luxuriate under grey skies.

Well, it’s just after 8am and we’ve just had our first stop near the lakes in a heavy mist. We did get away on time although one pair had decided to fly down rather than slum it on the coach. Unfortunately they didn’t tell the company. I was impressed by the fact that the driver made the decision to leave on time rather than wait. THEN the second driver phoned the folk to tell them he had left without them. That’s the way to do it.

Big holdup outside Manchester. Seem to be making up time now. By the Time Now is 10.35. Glad I’m not driving today.

Despite our holdup, we arrived only 15 minutes late in Southampton and with P&O’s usual efficiency were boarded in no time at all.  Our cabin is quite small, but bright and airy.  It was worth holding out for an outside cabin IMO.  Wandered round the ship to find lunch and shared a table with a London(?) couple who were also veterans of cruising.  After that, the inevitable lifeboat drill that is not the best part of the trip.  However, it is a necessary evil.

When the drill was completed, and we returned our ‘Mae Wests’ to the cabin, we went on deck to watch the ‘Sailaway’.  P&O almost seem embarrassed to take part in this.  They say there is a sailaway party, but apart from a DJ playing music, there’s no ‘party’.  No enthusiasm, no flag waving, nothing.

We were doing Freedom Dining for the first time and it seemed to work.  Some of the people at our table were a bit stand-offish to start with, but once got started chatting they were fine.  From there we went to the theatre where Scamp wanted to see an opera singer.  He was a New Zealander and very good.  Then I realised I didn’t have my camera bag.  I’d left it in the dining room.  Dived back to the other end of the ship and, after explaining to the person in charge, found it where I’d left it under the table!!

We went and watched the sunset after that and then had a drink in the piano bar on deck 16 (top deck).  Scamp had a Strawberry Daquari and I had a Mojito.  Then it was time for bed.  Clocks go forward an hour tomorrow.