Today we had breakfast and went to sit by the square pool, you know the one behind the outdoor stage. I thought about swimming, but the water looked a bit cold. Slightly more cloud in the morning but that was alright as it was really too hot yesterday. Scamp decided we’d go to the Spanish restaurant tonight and we booked it after lunch. Dinner was free, but we had to pay for wine which seemed fair.

After lunch we sat by the square pool again for a while and then I went for a walk along the wilderness road. It really was a wilderness. After I passed the underpass / bridge at the dual carriageway, I headed for an arayo, at least I think that’s what it’s called. A dried up riverbed. I think it’s being used as a general tip with loads of breezeblock and broken tiles in it. Lots of jaggy wee sticky willies. Very uncomfortable to walk on with sandals. If I go back, I’ll wear shoes. Saw a few lizards, a lot of butterflies and a couple of moths – all photographed. By the time I was coming back, it was getting overcast and quite cool.

Got back and found Scamp having coffee by the main pool.

Annoyance of the day. None of the managers, the ones with black suits, white shirts and black ties, none of them speak to you. Tomorrow I do the Jimmy Sinclair thing and speak to them, then if they don’t speak back, I’ll pull them up.

Went to the Spanish place for dinner. Nice cheap bottle of wine and a reasonable dinner although there was a lot of meat in it which didn’t suit Scamp.

Went to a magic show at night in the outside theatre. Very good and we both enjoyed it. 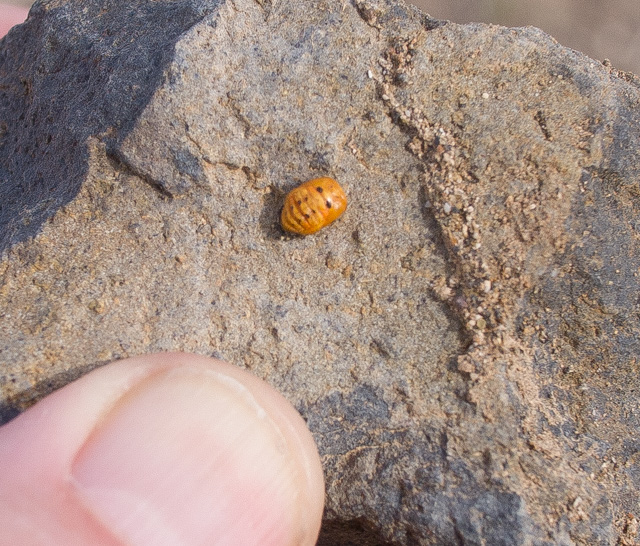 When I saw this wee orange spot on a stone, I knew I’d seen something like it before, but couldn’t remember what or where.  It was only after looking at it carefully with the camera, I remembered it was a ladybird pupa and I’d seen one like it in my son’s garden.  Despite the large numbers of ladybirds on the island, this was the only pupa I saw. 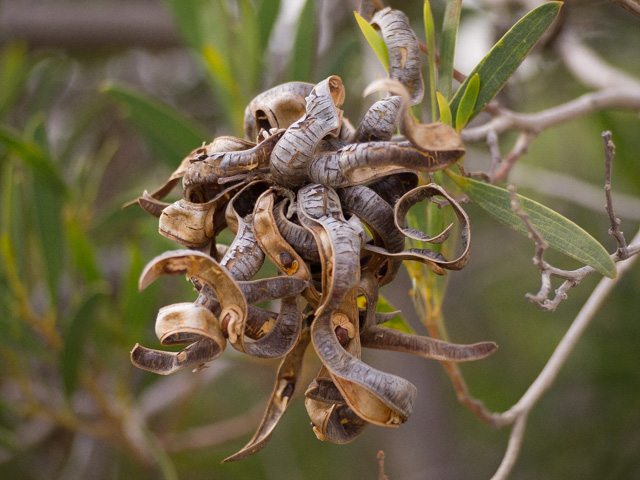 I have no idea what this bush is. This was a typical bunch of seeds. In a way, they reminded me of broom seed pods which twist and fire out the seeds like these seemed to do. I liked the texture and colour of the seed heads.