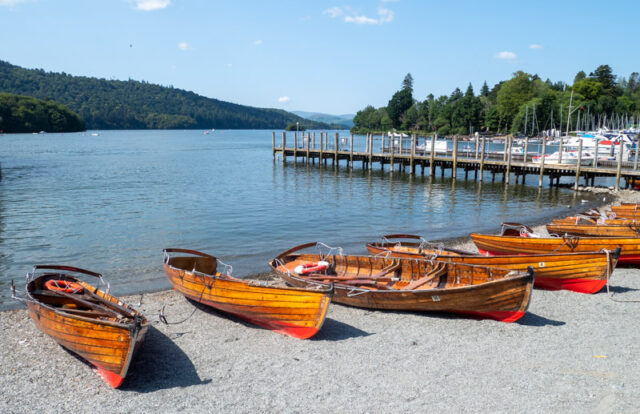 We were going on a cruise.

Neil drove Hazy and us to Lakeside where we got a boat with about 300 other people for a sail down to Bowness. Originally we’d intended going down to Ambleside, but because the pier is about an hour’s walk from the town, we took the shorter option.

The place was mobbed. Lots of Scottish voices doing their Staycation. We were going to look for Lakeland, but eventually we gave up because it was too far away. About 15 miles too far away.

All the cafés were really busy, but we did manage to grab a table in a Cornish restaurant with easy access for Hazy and very good food. Just toasties, quiche and pasties but all made on the premises.

After lunch we split up Hazy went to Costa for a coffee and Neil went shopping. We wandered round the busy streets and found a Herdy shop where Scamp got a new bone china cup because she hates the thick walled cups in the house. She also bought an umbrella to ward off any rain. Not that it looked like rain would appear from the clear blue sky, but more as a preventative measure. Just as we were leaving the shop, Neil appeared on an errand from Hazy. We agreed to reconvene in Costa. While Scamp was having a latte, I had a Café Freddo (iced cappuccino). It was a delight on such a hot day. Made me think of holidays in far flung foreign climes under a similar blue sky.

After ice creams for all of us, apart from Neil who dropped his ice and was left with the cone(!), we joined the big long snaking queue for the boat back to Lakeside. Halfway down the lake, three Eurofighter Typhoons flew very low overhead as a sendoff. We were impressed by that.  Today’s PoD was the line of rowing boats on the shore of Lake Windermere at Bowness.

I went for a walk later when it was cooler and got some more moody landscapes and also some flower photos.

Scamp was cooking her signature Spicy Chicken tonight and it was a great success, as usual. Made from an old Gary Rhodes recipe. It should have been served with couscous, but she served it with new potatoes and even those who don’t eat potatoes cleared their plates. It was good to be sitting round the table eating and talking together. We should do this more often.

Tomorrow we may stay closer to home because it’s going to be very hot.