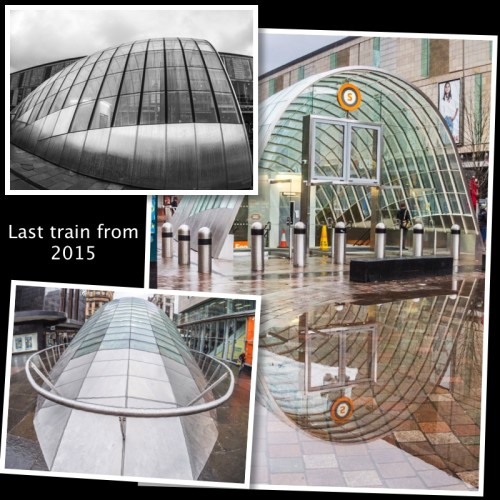 Just another one of the many grey days we’ve had recently. Didn’t want to stay in though, so we took the train to Glasgow. Not looking for anything in particular and everything in general. Ended up walking down Bucky Street, along Argyle Street, coffee in Nero at St Enoch’s and back up Bucky street for the train home. I tell a lie, we nipped in to Waterstones where I got the last ever Terry Pratchett book, a book of Soup recipes (I kid you not) and Scamp, because she was so taken with some of the recipes in the Nigel Slater book Hazy and ND’A gave me for Christmas, got herself another Nigel Slater book! More food books – you can never have enough cook books. By the way, Hazy, your calendar is printed and as we were passing a Ryman, I got the A4 envelopes to post it in. It will be despatched as soon as the post office recovers from New Year.

While we were at Nero’s, I took the opportunity to photograph the futuristic subway entrances there. I must say I really am impressed with the use of steel and glass in the construction. Also impressive is the way Glasgow Council had managed to bung up the drains in front of one of them to create a little shallow pond that reflects their shape perfectly. Artistic but not so practical. Well done again GC.

So, here we are again watching crap TV in the hopes that there will be something worthwhile to pass the time until “The Bells”. It’s unlikely, as it’s never been good before, but there’s a first time for everything.

Until next year, Good Night All.