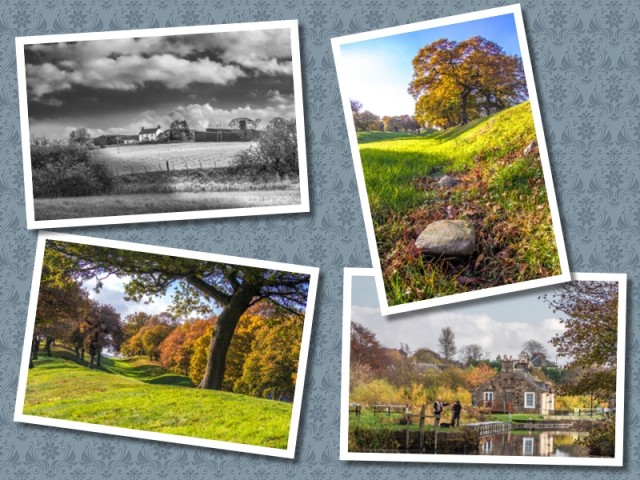 Got sorted out early today and drove to the carpark at Underwood Lock with my bike.  Cycled  west towards Dullatur, but didn’t quite reach it.  After the bridge that takes you to Glenskirlie, the cycle path becomes one long, uninteresting stretch and I couldn’t be bothered completing that section, just for the sake of it.  It wasn’t that the wind was gusting too strong in my face, well, not entirely because of that, but it was a contributing factor.  Waited ages for the clouds to break and the sun to come out over the farm in the mono shot, but it didn’t happen, so I took the shot anyway with the dull lighting, knowing that I could resurrect it in Lightroom later.   Cycled about 200yds to take the shot of the fishermen and looked back to see the clouds had broken and the farm was sunlit 😡 However, I knew by the time I went back to grab the shot, the sun would be in hiding again, so I carried on back to Bonnybridge (which isn’t all that bonny, but does have a bridge).

On the way back from that bustling metropolis, I stopped off at Seabegs Wood.  Possibly only the second time I’ve stopped there in the almost thirty years we’ve stayed in Cumbernauld.  Today it looked beautiful with low glancing light showing up the green of the grass and the gold of the leaves.  Now, you see that stone in the top right photo?  It would be good to say that a Roman soldier sharpened his sword on that stone.  Unfortunately that is unlikely as the ground at this point is very wet and boggy, so the original ground level is way below the present one.  Pity, as it would make a good story!

While I’m on the subject of fakes, that beautiful sky in the mono shot of the farmhouse is fake too.  Like I said at the start, the early afternoon light was really dull and uninteresting, but the Lightroom version of the shot was bright, but boring, so I decided to augment reality (AKA cheat).  I sandwiched the bright but boring shot with the dull and uninteresting one as layers in Potatoshop with the bright one on top.  Then I used a mask to cut away part of the bright shot to allow the dull one to show through.  The finished shot should look as if the clouds are scudding across the land and their shadows are producing the dark patches.  That’s almost word for word what the Flickr patrons got as their description, without the explanation.

Must try to get out more using the car to travel and the bike to explore, oh yes, and Potatoshop to augment reality