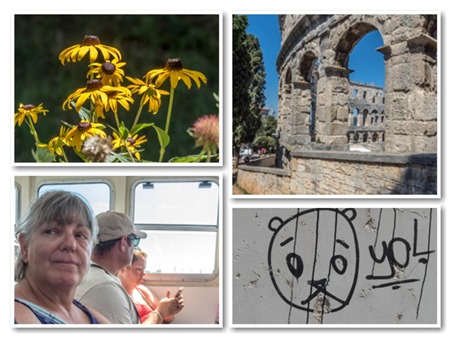 Had to get the tender ashore today.  Thankfully this is the only port that needs it.  The journey out to Pula from our anchorage was fine, but it was the apprentice who was driving coming back and he gave the gangway a helluva whack that shook the teeth of some of the older passengers!

Pula is a nice little place with quite a few beautiful churches and a Roman amphitheatre right slap bang in the middle of town.  We wandered round it and took some photos trying to avoid the TV lights and massive screen set up for the annual film festival.  Apparently there is an amazing light show on the cranes by the docks, but we will be long gone by then.

My abiding memory of Pula will be the amphitheatre the churches and the sex shops.  Unfortunately (or fortunately) it being Sunday all the shops, sex and otherwise were closed.  Later some of them opened , but we didn’t go back to explore the less savoury ones. 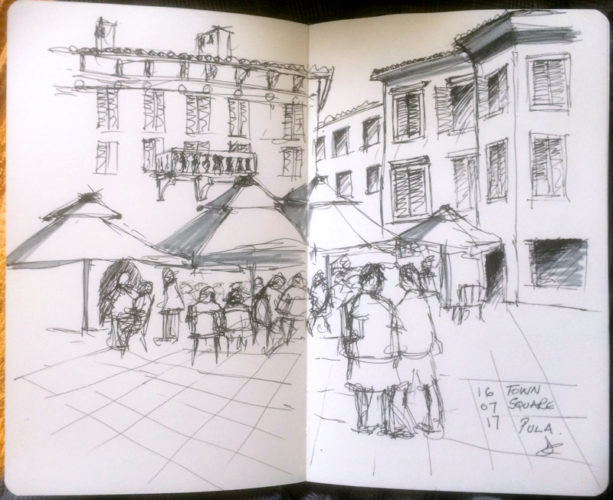 We walked through the old town and just under an archway which dates from somewhere in the BC region, possibly when dinosaurs ruled the earth, we had some very nice beer.  Most welcome because it was hot.

Got the tender back to the ship and passes some strange buildings on an island connected to the mainland by a low lying causeway.  They looked like they had been barracks but were now very dilapidated and well graffiti’d.  On the other side were other industrial and defence looking buildings and what looked like watchtower in among the trees.  Quite strange and possibly a throwback from the war in the ‘80s.

Dinner was in Smash ‘n’ Grab tonight and it was much better than we anticipated, just as long as you don’t go daft and pile your plate up too much.  At least you can see what you’re being offered rather than some fancy named dish that turns out to be boggin’.