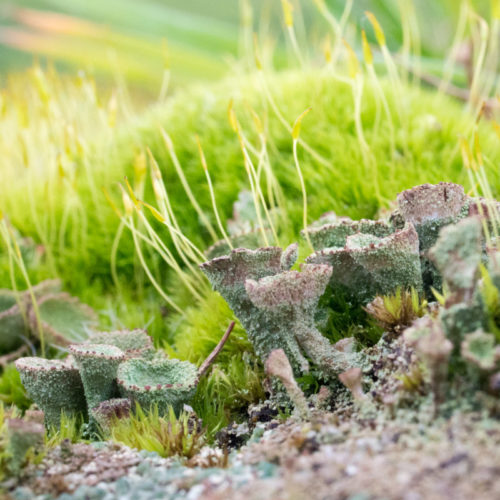 Woke with a fairly clear head this morning and the roughness in my throat had gone. I was miraculously cured!

Just as well really because today is Monday and that’s Gems’ Day. There is no way I could have gone to my bed and stayed there all day while they were singing. What I did do was strip out some old silicone sealant from the shower cabinet and dry out the resulting cavity. Then resealed it and left the bathroom smelling strongly of vinegar. It’s not the best repair in the world, but I think it’s waterproof, or at least better than it was which is the next best thing. Tomorrow, I have to put the shower cabinet back together again with more silicone.

With that done I was free to go out and take some photos. I drove up to the back of Fannyside to see if there were any likely subjects. I found a field with some black sheep that looked as if they’d just arrived from the sales. Usually sheep spread themselves thinly across a field, but this lot were all bunched together and when one of them ventured away from the crowd, the rest followed like … er … sheep! Must visit them next week to see if they’ve settled in a bit better.

My subjects today were macros. A scary looking Daddy Longlegs spider, some Cladonia lichen and some moss fruiting bodies. And the winner is <Cue Drum Roll> The Cladonia. It was a neat, low, tight bunch and that helped keep them nicely in focus.

Scamp was eager to help out with the beginners 6.30 class tonight, so we left early. Unfortunately there was an EIS union meeting in the main hall of the STUC building, so parking was at a premium and we were lumped in a small room on the second floor. Worse still, it was a carpeted room. It’s really hard to dance on a carpet, and especially hard to dance salsa on a carpet. They were doing turns tonight and with the friction of my feet on the carpet, it wasn’t doing my poor wee knee any good. Thankfully the meeting finished before our own class started and we were back on a hard slippy floor. Tonight’s move was called ‘Seo’. Not its real name of course. That was just the name of one of the dancers in a video the teacher had learned the move from. Jamie G once taught a move called Setenta Batman. We searched YouTube to find that move without any success until years later when another teacher told the class that the move was called Setenta Batman because the teacher in the video was wearing a Batman tee shirt. You get used to this method of naming moves after a while.
Andrew and, the newly returned to the fold, Megan had their first beginners class tonight. Apparently it went really well. I don’t imagine we will be helping with that class … Ever!

Tomorrow we may be going for a swim. If so, I may go to the gym and loosen up my leg on the bikes. First time since the spring, I believe!