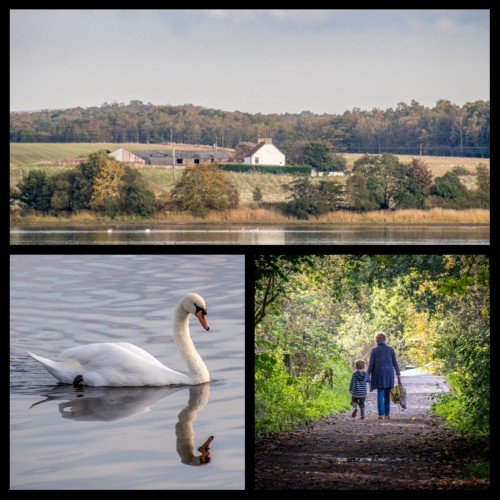 We had planned to go to Linlithgow today to get some fish, but after checking out the contents of the freezer, Scamp decided that we didn’t need any more fish, so it was time for a change of plan. It was quite a cool (i.e. ‘not warm’ as opposed to ‘fashionably attractive or impressive’) start to the day with a temperature of around 9ºc when we left at 11.30ish, but the sun was shining. An open day as we would say. Cold but bright. I had been moaning that I wanted a body warmer, waistcoat sort of thing, so we decided to head for Tillicoultry instead of Linlithgow because there are a lot of factory outlet type shops there and it’s a pleasant run. Got there and got the body warmer, not quite the one I had intended buying, but at least it will stop me moaning or craiking as my mum would say.

On the way to Tillicoultry I saw a sign for Gartmore Dam, and thought that would make a good place for a walk on such an open afternoon. We found the turn off without a problem and then noticed that it had recently been ‘Traffic Calmed’. Oh dear, what is this present fascination with these plastic and rubber blocks bolted to the road. On great long straight roads, yes, I can understand that these things work by slowing down the boy racers, but on twisty town roads they are simply a nuisance and an irrelevance. At the end of the previous racetrack we found the park and the dam. Two car parks, one either side of the dam. We chose the one on the left (not that it matters to you, I realise) and walked along the path through archways of trees. There were canoeists on the water, but they were vastly outnumbered by the swans, ducks and geese. It was three miles round the water and we decided that was a bit much for the time we had. We probably walked about a quarter of the way round and then walked back, but in that time one guy running with two dogs passed us twice!