It started out as such a nice day, but then after a dissatisfying phone call to attempt to clarify part of my pension, the day had become gloomier.  I went in to Glasgow to do some window shopping and get my hair cut.  When I was parking, I managed to scrape the front wing of my car on a concrete pillar.  The haircut went really well though, but I ended up as usual with jaggy hairs down the back of my neck and that was really uncomfortable.  Window shopping is great.  It costs nothing, but gives you the feeling that you’re getting something.  You just don’t get to take it home.  Do you really need it?  Anyway, the rest is explained under the photo of the day. 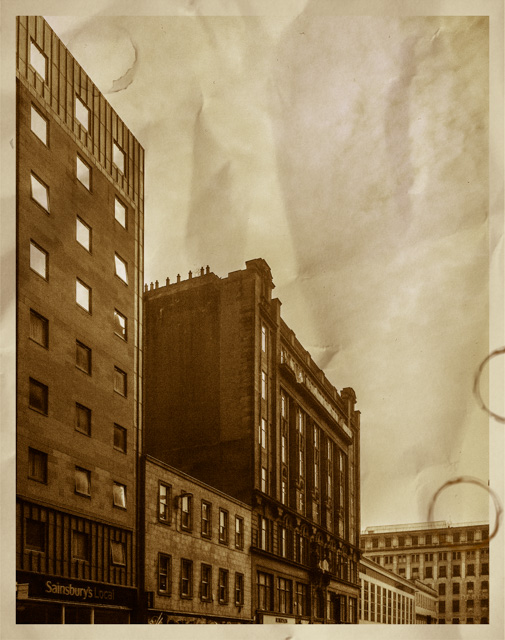 I started off taking this shot to capture the chimney pots on top of the building in the middle of the frame. I only had my iPhone with me and the chimney pots got a bit lost, so I dipped the image in a bucket of Photoshop and this was the result. Thanks to Kazoot (Mr K) on Flickr for giving me the idea for a grungy photo.