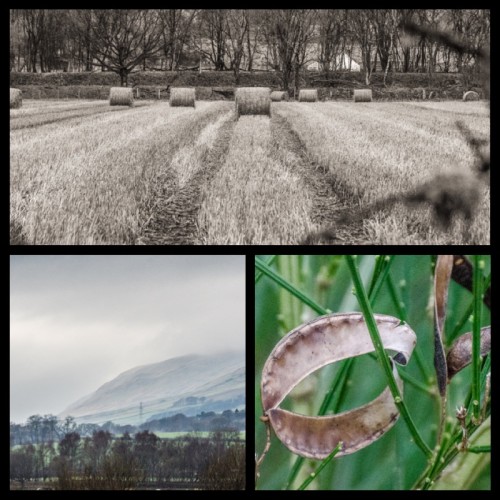 Out to the doc’s just after 9.00 this morning, then off to Larky to get my glasses fixed after they broke last week. It was no fun driving through about 10 miles of motorway roadworks. I’d hate to have to drive this twice a day, five days a week. It’s never ending too. I think it’s been going on for about a year now and it looks like it will go on for at least another year.

Larky hadn’t changed much, but I did see a strange sight. There was a flock of birds circling round the railway station. At first I thought they were rooks or crows, but then I noticed gulls, starlings and pigeons in the flock too. So strange to see such a mixture of different raucous birds.

Drove back through the same roadworks (there’s almost no way to avoid them) on the way home. I did take one diversion to pick up some icecream from Souave’s in Muirhead, and Edinburgh Rock too, of course.

There was just enough light left when I got home to get out with my new boots and get them dirty, or at least wet – and maybe get some photos. I walked along the railway walk and got what I thought were some good shots of an old twisted tree. When I got back, I realised that it just didn’t work. That’s how it goes sometimes. The boots survived the trip. I managed to get them wet and dirty, but my feet stayed dry. Success!