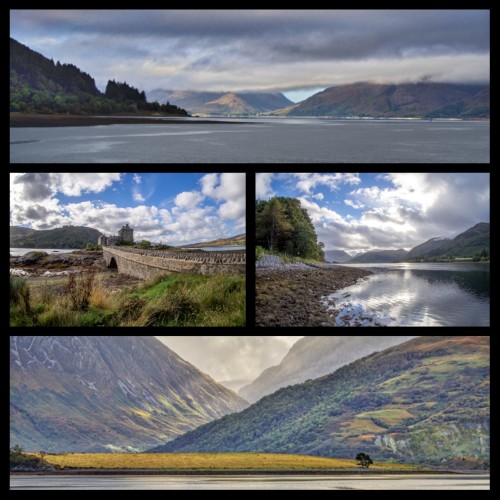 “My wife is coming.”
“She has a jacket.”
“It is a sheep. ”
“What’s her name?”
“It is Lorenzio.”
“Ok. I’ll let her through. ”
A little snippet of conversation outside Eilean Donan Castle. It’s amazing what you hear some times.
Having said that, he was Spanish and I wonder how I would have dealt with that if I was in Spain with my limited grasp of the language which runs to “Two beers” and “Where’s the toilet, please?”

Earlier we sat having breakfast at the hotel, watching the clouds rolling across the mountains and the light changing on their lower slopes. I did think about grabbing my camera, then decided that watching it was better than photographing it. Maybe my brain cells will retain it for longer than the hard disk would.

The drive up to Skye was eventless and through some beautiful scenery. We stopped for coffee and a scone at Eilean Donan Castle, the famous biscuit tin. That was where the Spanish lesson came from.

I had to forego the usual dram at dinner time to make sure I was legal to go for a drive at night to try to capture the Northern Lights, but the lights were out tonight. Scary drive though. Driving in pitch black on a single track road with passing places populated with the island’s sheep. I think the cloud cover was too heavy tonight and I don’t think it will be any better tomorrow. Rain is predicted. However, I’ve had a wee dram now and it, combined with paracetamol has stopped me thinking about the occasional jerk of pain from my ankle.

By the way, Lorenzio was wearing a sheepskin jacket.