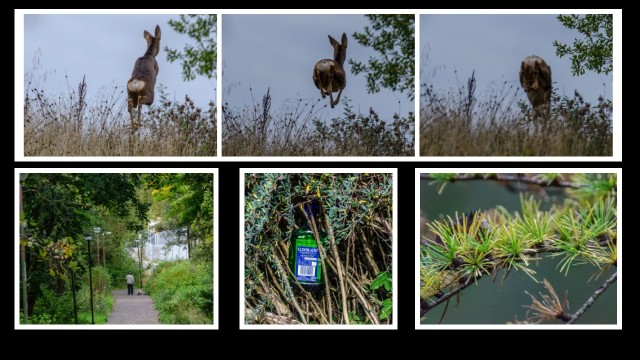 This is turning out to be a totally laid back weekend. Another day when we could have been doing constructive stuff, but we just kicked off our shoes and did nothing, well, almost nothing. I got up early(ish) to start cooking the Pork Osso Buco for my dinner. Yes, I know Osso Buco is traditionally a veal cut, but Waitrose do a lovely pork version. Anyway, I fried off the pork cuts and then stuck them in the slow cooker with onion, celery and a sliced apple for five hours. Had lunch later then went out for a quick walk round St Mo’s. Startled a deer from some bushes near the dual carriageway. I’m always worried when that happens as it’s so easy to spook them into running across the road, so I stood back and allowed the deer to run in front of me. I wasn’t quick enough to catch him or her, but at least the ran the other way, away from the road. I didn’t see much else to photograph until I got to the far side of the park when I ran into another deer standing on the side of a hillock. Got a couple of shots of the poor animal’s startled face, then switched on motor drive and got a series as it ran up the hill and away. It’s amazing how high they can jump.

Went to salsa later in the afternoon. There weren’t many people there at all, especially, there were very few men. Stayed for an hour and a half then went home. My ankle did suffer a bit so I was glad when we headed back.