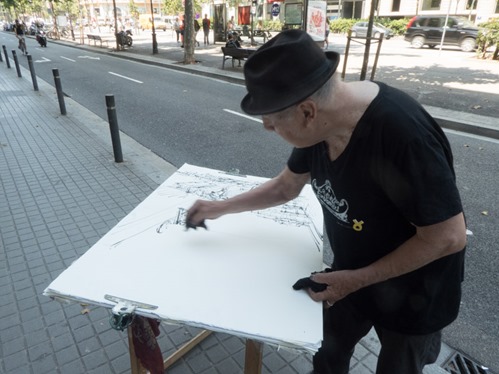 Got off the ship to the usual scramble for the free bus to take us in to Barcelona.  Asked one of the guides how long it would take to get into town and he told us abouthe t half an hour.   By the look of the snaking queue, it would take well over that to get in to town on the bus, so we walked.  And walked. And walked.  Down past three other cruise ships, past the heli-port and over the bridge to the town.  At the top of arched bridge it became quite bouncy when buses or lorries were passing.  A bit like the suspension bridge over the Clyde at The Green, but on a much bigger scale.  It took us about half an hour, just as predicted.

Walked up La Rambla and watched the ‘Human Statues’ setting up, likewise the craft stall holders.  For once we went in to the market and walked round amazed at the variety and colour of all the fruits, meats and fish that was being sold.  Had a beer in a wee square just outside the market and then continued up La Rambla.  There was a heavy police presence on the street and the now familiar army personnel carrying automatic weapons.  I’d guess with the tensions in this area with Catalan extremists, this is inevitable.  It didn’t seem to put off the hawkers and ‘lookie-lookie’ men selling fridge magnets and fans from their white bed sheets on the ground.

At the top of the street we went through the Place de Catalunia.  I hope I spelled that correctly.  Without any WiFi here that doesn’t cost an arm and a leg, it’s difficult to do the normal Google checks! Out along a street, still heading in the same direction I got today’s PoD which is an old man sketching a lovely perspective view of the street.  He was working on a full sheet of watercolour paper, drawing with a sharpened piece of bamboo cane, dipping it in to an ink bottle he held in his other hand.  He seemed to be totally engrossed in his work and although he answered my questions, only gave short answers.  Beautiful work.

I wanted to get back to La Ramba to find the famous Miro mosaic.  It was just where we’d turned off Rambla to go in to the market.  Found it and photographed it.  Just before that I’d done a 15 minute sketch of a wee church in a side street.  Not nearly as good as the old man’s sketch, not even in the park.

Crossed out of Rambla and past a flea market we’d visited when we got to the town, then Scamp found the place where we could get the bus back to the ship.  Don’t think I could have faced another walk back!

Dinner tonight was with a young couple on their honeymoon, a doctor who had broken his neck while at college and was paralysed from the neck down and his carer who we presume was also a nurse.  All great company.

Missed the show, so early bed.