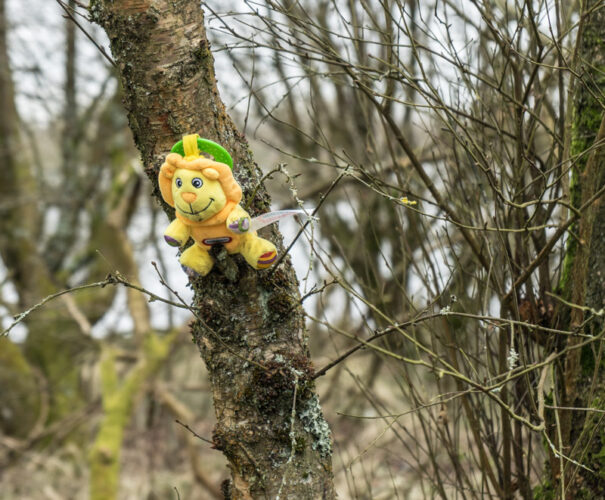 … and into the woods as well.

It was dry in the morning, but cold. Scamp’s wee red car needed a run to warm it up, charge the battery and get the wheels moving, so she got to choose the destination. She chose Drumpellier. It being a Friday, lots of folk were off work and lots of folk had chosen Drumpellier as a place to walk with their pals or push a pram, some even joined the two together and went for a walk with their pal while pushing a pram. Multitasking. Even worse, half the car park was cordoned off to allow the Council workies to get their machines out and lay new footpaths. Spaces in the car park were at a premium, but Scamp found one and just drove into it and we were there.

We walk counterclockwise round the loch. It’s really too big to be a pond. Counterclockwise was not the correct way. Almost everyone else was walking clockwise. Almost everyone else was walking round the loch too on the main path. Scamp doesn’t do that. She likes to leave the main path and take the roads less travelled. That isn’t a metaphor for anything, she just likes the less busy paths. With all that in mind, we took the first available turning away from the main path and discovered the woods. Oak and beech woodlands in Coatbridge isn’t what I was expecting, nor were the deer we saw in bit of bogland between the wooded paths. We only took two paths and easy ones at that, but we both agreed that we’d go back again some time, all being well. We’d also take the path less walked and avoid the conveyer belt everyone else was travelling on. At the end of the path we walked through the Peace Garden and bumped into two guys, one in a wheelchair and one walking. Both retired, the one in the wheelchair hadn’t been out of the house since November. I’m glad he and his pal, both photogs, got a dry day, even if it was cold.

In the afternoon, after lunch I went for a walk in St Mo’s on my way to the shops, but nothing I saw replaced the PoD I’d taken at Drumpellier. It was a wee child’s toy sitting on a stubby branch of a tree . Hopefully whoever lost it will find it again some day soon.

Don’t have any plans for tomorrow. It may involve another walk and then again it might not. It all adds to the mystery of life.