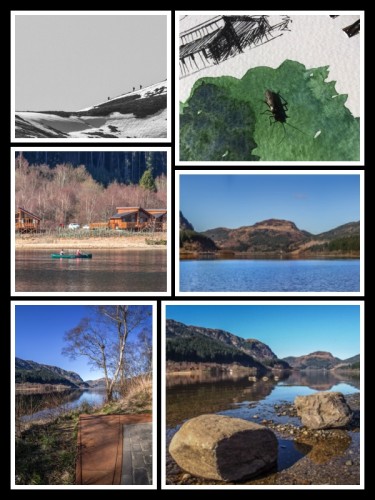 Sitting in the sun for a couple of hours at Loch Lubnaig. Taking foties, doing sketches and  being amazed at the difference a day makes. Yesterday, all was grey, but today there’s blue sky all around.

We couldn’t decide where to go today and last night had almost settled on a trip round the shops in Stirling.  This morning when we saw the bright blue sky, we re-evaluated our options.  Finally we settled on Callander with the option of travelling on to Lubnaig if the weather permitted.  The weather did permit and we did take the Lubnaig option.  We drew in at the first of the new parking places which are so much better maintained than the old ones where the dobbers would overnight camp from Friday to Sunday.  Buckfast bottles and who knows what else left behind.  The only good thing about it was that it was free, but you didn’t wander far from your car in case it was propped up on bricks when you came back.  Those days are gone now, so are the dobbers and the Buckfast.  Now you’ve got to pay to park, but £1 for two hours is worthwhile for peace of mind.

I had hoped to see the seaplane land on the loch, but I think that company has now moved to Loch Lomond.  What we did see were mountain climbers on a ridge, canoeists on the loch and a beastie on my painting.  First time for a long while I’ve painted in public.  It wasn’t the best effort, but it was a sketch and it was in the open air – I won’t use that arty-farty French expression, but it was fun.