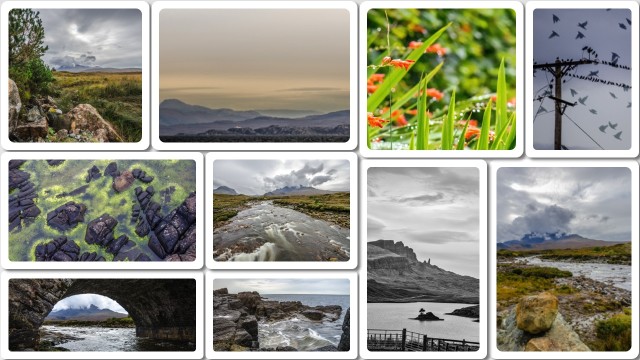 This morning the sky in Skye looks a lot better.  High level cloud and so far it’s dry.  I think we’re heading for Portree ( the big city).  Who knows where after that.  I need to catch up on my sketching at least.

So we park at Duntulm watching the sea when some english idiots squeeze their black people-carrier reg KF15 CDN right between us and the fence, completely obscuring our view. Some people are born ignorant, some have to learn. They walk among us.

We drove round to Uig again.  It’s a sort of ritual with us when we go to Skye.  We drive round the top of the island to Uig, then down the west side.  Sometimes we drive up Quiraing and on to the high road to Uig, but somehow, all roads lead to Uig.  Today, for a change we drove into this thriving metropolis and stopped for a while to watch the world go by.  After the excitement of Uig, we drove back down to Portree and then couldn’t decide where to have lunch.  We weren’t going to the bakers again, that was definitely not on the cards.  Good scones, but dodgy, watered down coffee.  Even Murd agreed about the coffee.  So, what about a drive down to Sligachan and have lunch there.  Drove the nine or ten miles down entranced by the views of the Cuillins (why don’t spellcheckers understand Scottish words like Quiraing, Sligachan and Cuillins?).  Tried a multiple exposure shot of the river to process later in Photoshop into a fake slow shutter speed shot.  Took a load of shots of the constantly changing cloudscapes on the peaks.  Such a wild looking place.  Unfortunately the lunch bar at the hotel was closed for the season and, as it was Jackie’s Fish Pie for dinner, we didn’t really want to spoil our appetite with a full lunch, so we headed back to the Capital City of Portree.  Had lunch in the cafe, just the ordinary cafe, not the Arriba one.  Scamp was desperate to see inside the newly reopened SYHA hostel run by our niece Jac, daughter of Jackie – confused?  Don’t be.  Met Jac and had a look in the hostel that used to be a chip shop!!  After that we headed back up the road for that fish pie.

We had an hour or so to spare when we got back so Scamp trusted me to go for a walk down at the slip by myself as long as I was careful.  But I’m always careful, am I not?  Anyway, it was quite cold there.  Bumped into Murd who was taking the dog for a walk and a wander for himself.  He was talking to a bloke from Newcastle who was travelling around in a van.  The bloke thought Murd with his boiler suit on was in charge of the parking at the slip.  They easily slid into conversation and were best mates by the time he left.  I’m not sure if he was there on purpose to make sure I was being careful or whether it was just coincidence.  Anyway, took a few photos of the gloaming light on the water and on the cliffs at Applecross across the water, then went to the ‘beach’ where I met two blokes who were looking for the dinosaur footprints.  I told them where I had been told they were, currently under about a foot of water.  They found ‘another one’ and got some photos of it.  They seemed happy.  Who’s to say they weren’t right.

Fish pie and a wee dram were calling quite insistently now, so it was time to go.