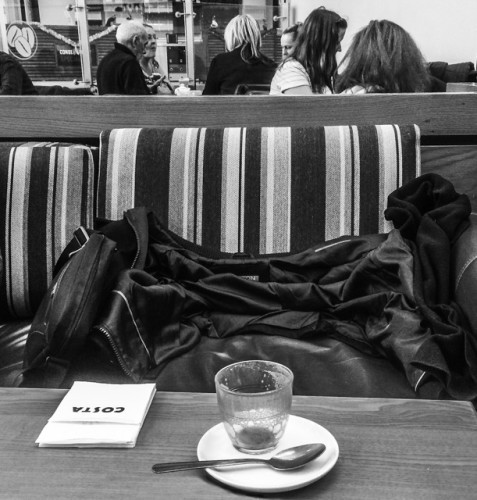 Have you ever had one of those days where you have everything planned out – then one thing after another screws up? That was today.

It really started last night when my niece phoned up at 9.00pm to say that she had broken the door handle into her kitchen and would I go up and sort it out. Well, as you may remember, yesterday was an ‘Auld Guys’ day in the HorseShoe Bar, so I was in no fit state to drive, thankfully Scamp did the honours and guided us up to our niece’s house. Just like she had said, the handle was broken off at the shaft, so I took the whole lock assembly off and said I’d get her a new one today and fit it for her. As she was going out in the afternoon, she asked if I’d get it done in the morning. I’d already planned to go to the hospital to get my ankle x-rayed in the morning, meet Fred for coffee at noon and maybe, just maybe get some photos taken in the afternoon. Change of plan. Up and out for 9.30am and off to B&Q to get the replacement handle. Replacing the handle was no problem as all the hard work had been done when I fitted the original. That left me just enough time to get back home and dump my tool bag before going up to meet Fred.

We had our usual talk about painting, sketching and setting the world to rights over a cup or two of Java, or as near as you can get to Java in Costa. I was really impressed with some of his Egon Schiele and Gustav Klimt copies. Nudes of course, what else!

After that it was over to Airdrie to search the hospital carpark for that elusive space that isn’t too tight, a disabled space, or taken up by some builders rubble. Found one. Right at the back of the carpark. Almost in Coatbridge! Found my way to X-Ray department, handed in my card, confirmed my details and went to wait. After 45minutes had gone by and there was no sign of anyone coming to take foties of my ankle, I went to check at reception. A different lady asked my name and DOB, then said they had no record of me. Had I checked in at reception? I told her I had and that I had handed in my doctor’s referral. Her reply was the noncommital reply most receptionists use when staring at a computer screen: “I don’t know what happened there.” Neither did I, but just after I returned to my seat, my name was called and the foties were took. I was told to wait while they ‘processed’ them. I think this is the terminology for the mysterious process of downloading the images to the computer. After waiting for about 15minutes for the ‘processing’, another nurse came through to say there was a slight technical hitch. What? Another one? This time the computer wouldn’t accept my details. Was it me, I began to wonder? Am I not really here? Maybe I should be at a completely different hospital in a parallel universe. Have I gone through a black hole? No, I hadn’t gone through Coatbridge, just parked near it. However, all was resolved in the end by the IT technician’s secret procedure of switching it off, counting to ten and switching it back on again, then typing the details in by hand. I was free to go, and even better, it looks like there are no bones broken or chipped in my ankle. Just ligament damage. Take paracetamol.

By the time I got out the light had gone and it was back to the twilight world we inhabit from November until February, except when it’s totally dark.