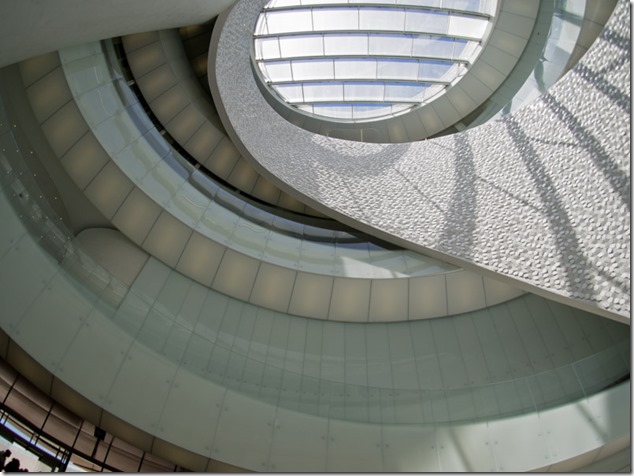 After breakfast we joined the queue to exit the ship and get in another queue for the shuttle bus that would take us to Oporto.  You see, we weren’t really at Oporto, we were at Leixões which is the port for Oporto which isn’t actually called Oporto when you’re in Portugal, it’s called Porto.  Right, glad we’ve got that sorted out

The queue to exit the ship was long and twisting.  Just as we were beginning to see daylight, we joined another queue, coming from the opposite direction.  Twenty minutes after joining the queue, we exited on to the dock.  Then we had to go out through the beautiful terminal building and saw the extent of the queue for the bus to Oporto and immediately decided to go to Leixões instead.  I’d like to tell you it is a pretty little fishing village, but it’s not.  Apart from the cruise terminal building, it’s an ugly sprawling concrete town with two things to recommend it.  An enormous Lidl and a beautiful beach.  We visited both.

Have you ever noticed that all Lidls smell the same.  It’s not a bad smell, or even an unpleasant one, it’s just a smell.  It might be something to do with the air freshener they use.  This is the first time I’ve realised that it’s there, but it is, definitely.  Check the next time you’re in a Lidl!  Water on the ship costs £1.75 for 500ml.  Water in Lidl is €0.11 for 330ml.  It might not originate from Harrogate as the ship’s water allegedly does, but it’s still water and at roughly 15p for 500ml, it’s a lot cheaper than P&O H₂O.  We bought a bottle, to see if we could get it past Gort the guard at the ship who scans everything you bring on board.  Any alcohol you attempt to bring back is seized and held in the hold until you return to the UK.

After buying our budget water, a small bottle of orange juice, which might also be confiscated (they don’t tell you about that in the shiny brochures, do they?) and a bag of cherries which were never going to make it back to the ship, we went for a beer, because it was hot.  Just over 30ºc hot. We had a beer in a beachside cafe, then a coffee and a Portuguese custard tart that was just as good as the ones we usually have in Lisbon.  When we left I asked the waiter how to say “Thank You” and found out it is “Obrigado”.

Next we went for a walk along the prom.  That’s one of the delights of a holiday for Scamp, a walk along the prom, in the sun.  We walked right to the end of the prom, watching the surfers out catching the waves, then we turned round and had a paddle on the way back to the bus.  Just got to the port gate as the bus was arriving and surprised the driver by saying “Obrigado” rather than “Thank You” when we got off at the terminal.  The Terminal is an impressive building with swirls of white concrete covered in shiny tiles.  It really has to be seen to be appreciated.  Boarding was much easier and quicker than disembark and we grabbed the opportunity to do some sunbathing at the blunt end of the ship (technical term).  We went swimming in the little kidney shaped pool at that end and then found out that there had been a medical emergency on board and our departure would be delayed by about 40minutes.  Those 40 minutes expanded to just over two hours, but with the emergency ambulance driving slowly down the dockside, some poor couple’s holiday came to an end.  Hope the woman was ok.

Dinner was with a talkative group at our table and after that, we played cards as the show was nothing to write home about, even in a blog.