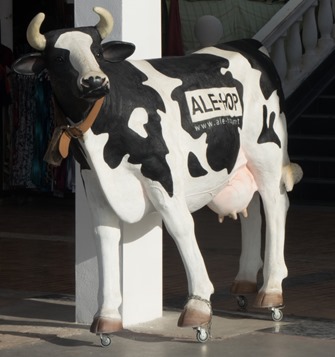 It was a bit of a shock getting up and out this early, but we had just handed the keys in when the bus arrived to take us to the airport.  It only took about ten minutes for the journey then we dropped the bags and got through security.  We had our overpriced breakfast at All Bar One.  Scamp’s was cold and the girl took it away and brought it back on a hot plate.  Eggs and toast were the same, still cold, but the plate was hot.

The flight left on time and just as we were climbing over the M8 we could see the long queue of cars heading in to Embra.  Probably the beginning of  a long day for some unlucky people, and the prospect of the same queues going home.  We, however, were off to sunny climes.

Because we were almost first in the queue for the bag drop at the airport, we were in the last lot to get our cases from the carousel.  It’s always the way at airports.  First on, last off.  However, the taxi was waiting for us and we were soon at the hotel.  Room wouldn’t be ready until between 2pm and 4pm, but that’s normal.  No big deal, we left the big cases at reception and went and had lunch, then went for a quick walk around the hotel.  When we went back the room was ready and they were putting up the Christmas decorations!  This one of my pet hates.  Christmas decorations in November.

Room looked fine.  Only on the first floor, but that’s ok by me.  It was a bit noisy because we are right next to the road, but again, that’s fine.  Had a Hotel Beer and everything was sorted. We went for a walk around the town to see what had changed (not much) and make sure some of the cafes and restaurants we wanted to go to were still there (they were).   Today’s PoD came from the walk.  Away to the south near the strangely named Port Colon (hopefully means something better in Spanish).  Cows on castors, what a strange idea!

Dinner was a low key affair, no posh dressing up here.  After dinner we sat at the front of the hotel in the covered area listening to a bloke singing.  One couple got up and danced a very strange, almost balletic dance.  Then the woman danced in the same style, but solo.  Another couple fumbled their way through Ceroc to a tune and finally an old couple (even older than us) got up and danced a swing routine.  I could see Scamp champing at the bit to dance some salsa.  Finally our chance came and we danced along with the old couple to a Spanish tune.

That was it.  Too many beers, too many G&Ts, not enough sleep last night and not enough energy tonight.  Tomorrow is another day.