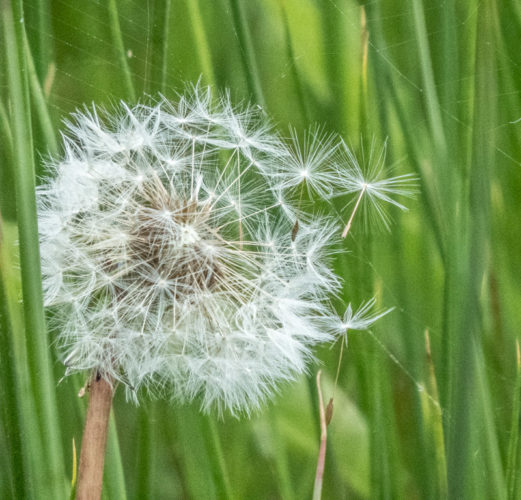 This morning began early with me taking the Megane to the garage to have its water leak investigated. By lunchtime it had been confirmed that the problem was a hole in the radiator. It had to stay in overnight and is scheduled for an operation tomorrow with a replacement radiator being fitted. Scamp’s dad would simply have repaired the radiator, because that was his job. Now they just replace them. More expense.

Didn’t do much for the rest of the day until I was coaxed out for a walk by Scamp, not that she was coming with me, oh no, she was watching the final of MasterChef on catch-up. One thing I did do was work out how to use Mail Drop on the Mac. Very clever way of sending large (> 50MB) files to someone. I should make more use of it.

Walked over St Mo’s and got some photos of spiders and dandelion clocks (a must for photogs every year). Still using the Teazer and getting more used to it.

Had to drive Scamp’s car to Salsa tonight, but luckily the traffic was light and we made it with no problem. Salsa itself was fun. Beginners were experiencing the thrill of Exhibela. Advanced class was pretty small, but we covered La Cuadra, Tresario Doble, Cubaa Se. We also tried one of the most exasperating moves, La Confusion where the leaders become followers and vice versa. So well named. No Salsa on Monday, so we have to wait a week for our next fix.

Tomorrow? Scamp has coffee in the morning with Shona and I have coffee just after lunch with Fred and Val. Then hopefully we have to pick up the car.