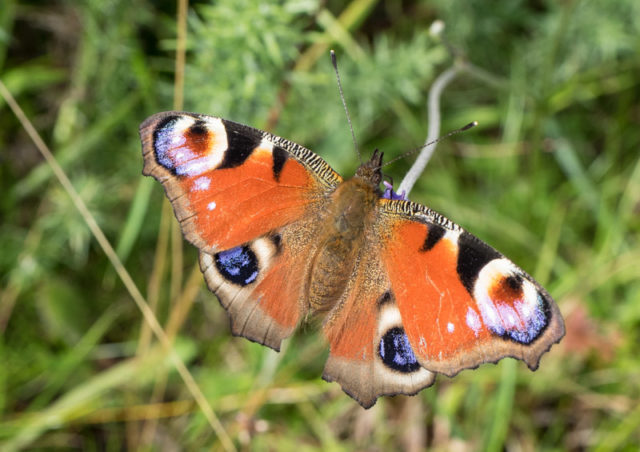 Went out early to make sure I had a photo for PoD. Yesterday I saw some toadstools over in St Mo’s and today I thought I’d go better prepared and get some wide angle shots of them. Unfortunately, when I got to the spot where I was sure I saw them, there was nothing there. After a bit of searching around I finally found where they’d been, but of the fungi there was nothing left but a bit of the stalk. It looked like something had eaten them. Hope they were mushrooms and not toadstools then!

I did see a brightly coloured Red Admiral butterfly, but it simply refused to settle on any of the Scabious flower heads. I finally gave up after getting one distant, out-of-focus shot of it, just to check when I got back home that it was, indeed, a red admiral. It was. The Peacock that became PoD was a much calmer individual and posed quite happily for me. 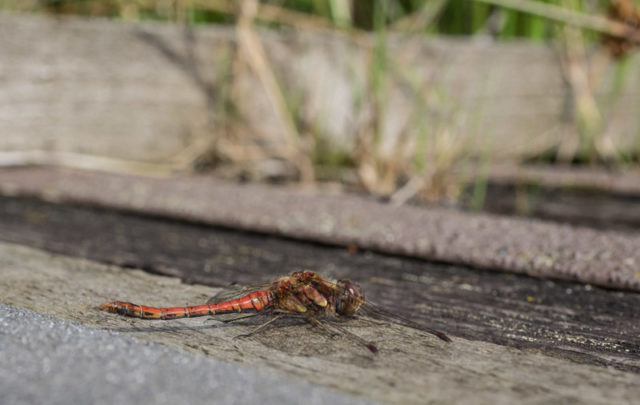 Dragonflies were out in force too loads of Common Darters (Sympetrum striolatum). They are fairly small dragonflies. Red/orange coloured and easy to photograph as they like to sit on the metal strips on the boardwalk at St Mo’s, where I’m guessing they can pick up some heat from the metal after it’s been heated by the sun.

I made some beef olives today using beef ham that had been battered flat to help it roll round the mince core more easily. They would have been good if I’d turned the gas off after cooking them for half an hour, unfortunately it wasn’t until I smelled burning that I realised I’d turned the gas DOWN, not OFF as instructed. Oh dear. Well, the carbon is good for the digestion they say. Actually it’s people who burn things a lot who say that!

Dancing at the Record Factory in Byres Road tonight and really quite enjoyed it. We went a bit later, we thought, but it didn’t liven up for nearly an hour after that. I was exhausted, both physically and mentally by the time I called a halt. Scamp would have been happy to dance more! I think she is beginning to get over the Lurgi that’s been hanging over her. Maybe she needs a wee holiday.

Tomorrow I’m going in to Glasgow, hopefully to get my hair cut, because Gems will be here for their first practise of the new session. That’s usually a good time to be elsewhere.