It’s Saturday and I’d decided I wanted to go to Stirling for a curry at the Indian Cottage. It used to be good and I had become addicted to the Chicken Tikka Chilli Boona, but they recently changed the menu. Gone is the CTCB also gone is Scamp’s Vegetable Dhansak. We had lunch there a few weeks ago and weren’t all that impressed, but decided to give it another go. Bad move. The lunch was much worse than before. This time we may be gone for good. This used to be one of the busiest curry shops in Stirling. If you weren’t there by 1.30pm you would have to queue for a seat. Now it’s half empty. Maybe that’s an indictment of the maxim “if it ain’t broke, don’t fix it”. Hey get me with ‘indictment’ and ‘maxim’, and this from the boy that didn’t get his O Grade English!

Got back early, and dissatisfied but at least it gave me time to go out cycling for a while. A chance to see if all that gym work was worth while. Headwind going out, as per normal and it was a struggle. So disappointed. For God’s sake, I’ve been going to the gym for two whole weeks now! That’s forty minutes not the cycling machine thing. Surely I would be fit by now? What did I pay my gym fees for if it doesn’t make me fit? Total waste of my time and money. I’m not a happy ‘gym bunny’. Anyway, the cycling is becoming a means to an end, not an end in itself. It’s a device for getting me to places to take photos, but the Kona is still a lovely bike. Much better than the heavy mountain bike with front suspension. It never ceases to amaze me how well it accelerates,even in a headwind.

On to the photos, and a warning to JIC and Hazy – There will be technospeak : 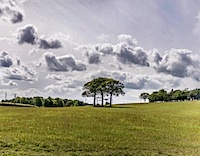 I like these three trees and I’ve photographed them many times. Today I didn’t have a lens that covered them adequately, so I did the next best thing and shot nine frames with the Panasonic 45-200mm with the intention of stitching them later. This time I took the long route and used Autopano. It’s a bit more circuitous than just plain “merge to panorama in Photoshop” from Lightroom, but it does have the advantage of giving more control. I was impressed with the basic output, but tweaked the exposure in Lightroom to give a more interesting result. I’m pleased with it. That’s why it’s my photo of the day. 365/150

The next ones were just luckies. I saw them while tramping through the grass, thinking that I had to be very careful as I’d listened to a program on the radio yesterday about sheep ticks infecting people with Lyme disease. I’d got a tick bite about a year ago when we were in Skye and became ultra cautious, checking every day for the telltale ‘target mark’. Thankfully it never appeared, so it looks like I’m clear this time. Having said that, it pays to be cautious, and take these things seriously. With all my antics chasing deer with my camera, I forget that these wee beasties are attracted to deer as well as sheep and can make your life a misery. Anyway, no ticks were found today, but I almost missed the ladybird making its way down a grass stem and next to it a couple of Bonking Beetles, bonking. Yes, I know they are also called Soldier Beetles, but that’s not half as much fun. I liked the luminosity of the grass and the colour contrast with the insects. Both shots taken with the 45-200mm Panasonic lens with extension tubes to get the close up shot I wanted. 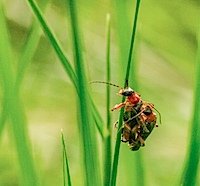 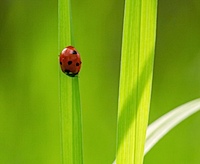 A good day’s cycling and a tailwind to look forward to on the way home. Hooray!