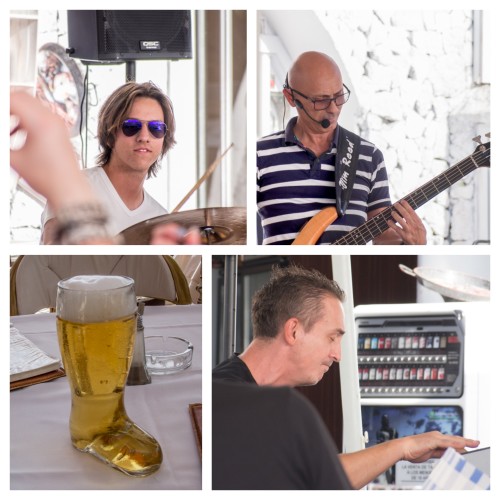 Oh calamity.  This morning I boiled the kettle for water and coffee. When I poured Scamps water her cup cracked neatly down the side.  We’ve had this pair of cups rattling around a yellow bag for ages and now I’d broken one. We realigned our targets for the day to include buying an other cup. Otherwise, today, as predicted we settled at the level 5 pool and soaked up the sun there for an hour or so, allowing me to get stuck in to my new Rebus book.  It’s amazing how fiction mirrors life. Rebus has retired, but still hankers for his old life in the polis. I’m retired, but still occasionally hanker for my old life …  But then I wouldn’t have the chance to go gallivanting to foreign climes, so there the similarity must end. However, I digress.  We spent a useful hour or so reading and people watching at the poolside, then I decided to take the splurge literally.  I was sitting with my feet in the water, steeling myself for the actual plunge when an Italian bloke explained in broken English/Italian that if I took a cold shower before entering the pool, it would be easier. He was right, it was, and as usual, once you’re in, it’s not so bad. Scamp decided to take the plunge too.  Aren’t we the brave wee souls?

By the time we were both dried, it was nearly lunch time, and as we weren’t going to get lunch on our half board, we took ourselves off for a walk in search of food providers which are many and varied on this island, as are cup sellers.

We walked literally for miles, stopping along the way at an Italian cafe for Pizza Napolitana (me) and pasta al pollo (Scamp). Lovely. We eventually ended up at Port Colon!! An unfortunate name for what looked like a beautiful place.

On the way back we stopped off for a beer at a wee cafe where a jazz band were playing. Can’t remember their name but the were good. Got a cup for Scamp in a Hiperdino. Had a couple of G & T’s before dinner. For dinner, read DIRE. It just gets worse. School dinners were better than this. Worst of all, no rice pudding!  What is the world coming to?