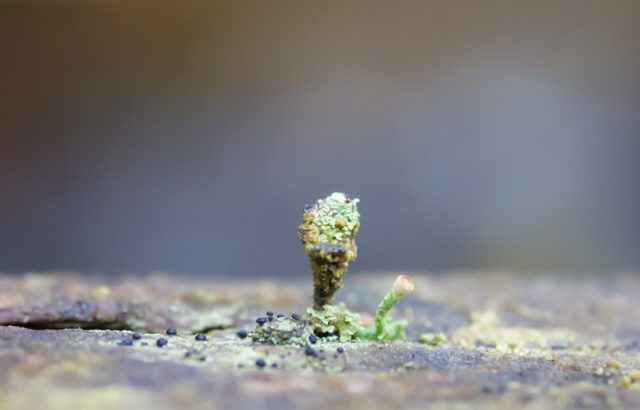 Today I was encouraging Margie to draw a cube in two point perspective. Instead of me doing the drawing, Margie would be doing it while I watched her and gently pushed her back onto the right path when she strayed. I think it was a success because after three or four tries she was definitely getting the hang of it. After the class, she stayed for Scamp’s Music Class, but I didn’t.

I drove down to Cumbersheugh railway station and walk along the Luggie, upstream for a change. It’s a bit more interesting in that direction and not nearly as mucky. It was along that way I found today’s PoD. I think it’s a variety of Cladonea lichen, but I’m not sure what particular family it belongs to. I’m sure someone on Flickr will know, or at least have a good guess. It was cold and miserable, and I curtailed my walk and headed home.

Scamp and I have been dancing Salsa for about ten years and in that time have helped with a great number of beginners, some of whom have continued through the ranks and joined our advanced class, but I’ve never met anyone I knew outside the salsa circuit … until tonight.

The class were practising a couple of moves, old moves, but ones we’d partly forgotten when into the class came one of the teachers I used to work beside. She was in a different department, but our paths had crossed many times. Not such a strange thing to happen really. It was inevitable that, even in a place the size of Glasgow, I’d bump into someone I knew eventually. It still took me by surprise, and her too I imagine. If it had to happen, it couldn’t have been with a nicer person. If she enjoys the classes, we could even be dancing in the same group some day.

No plans for tomorrow, but I must start looking for a shirt for the Salsa Ceilidh on Friday.