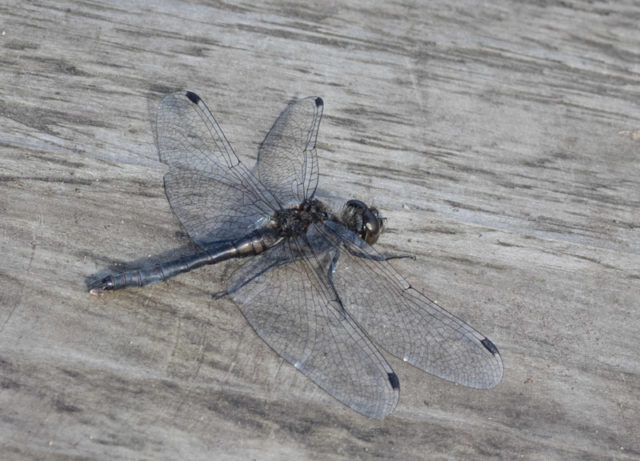 Scamp was having a cleaning day today, and just for the fun of it, I got involved too.

My target today was the top of the chest of drawers in ‘my room’. It’s not seen the light of day for manys a long year. By the time I was finished it wasn’t exactly clear, but about four or five inches depth of detritus had been chucked out or stored, mostly stored to be brought out again in a couple of weeks, but some dried up pens and odd bits of paper were consigned to the bin. Lots of photographs and paintings were put into long term storage and it even amazed me, some of the things I found. It’s not finished yet, but it’s a good start. I have to admit it’s beginning to look like a room again.

After lunch, Scamp decided it was dry enough to cut the front grass and I left her to it, grabbed my raincoat (just in case) and headed off to St Mo’s with not real chance of getting anything decent, but the sun was out and so was I, and that was good enough.

Saw a tiny black dragonfly on the boardwalk of St Mo’s. Stealthily crept forward stalking it and taking great care not to let my shadow fall on it, a sure way to spook a dragonfly. I was down on my knees just grabbing today’s PoD when I had the feeling that someone was behind me. I glanced over my shoulder and a black and white dog was standing behind me looking agitated, probably because I was blocking his path. I got up and apologised to him and his owner who just laughed. He probably wondered what I was doing crawling along the boardwalk, but then saw my camera and thought “Eejit”! Probably right too.

Found another three dragonflies, red ones, later in the walk playing musical chairs on four logs. One would lift off and that would cause all of them to circle around for a while before settling down again, then another one would take to the air and it all started again. They seemed to take turns at it.

Finally got a decent shot of a Painted Lady although it was quite far away. It was being blown about on the breeze, all over the place.

Danced at the Record Factory later. Met some girls we haven’t seen in years. Good to catch up.

Tomorrow it’s Gems and Salsa in that order, all being well.