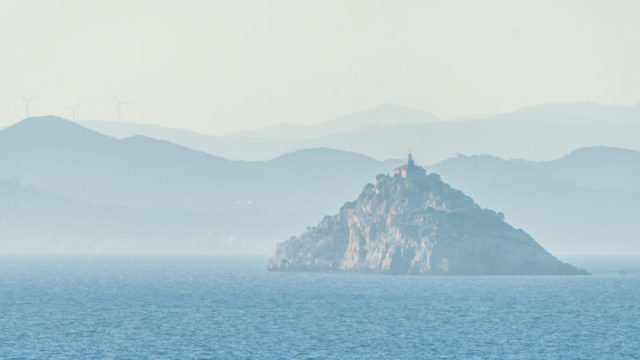 Arrived in Dubrovnik to find that we were berthed under the enormous bridge, not right under because we wouldn’t fit!

Breakfast on the upper deck just to make the most of another glorious day with wall to wall sunshine.

Took the shuttle bus in to town and met the most horrendous traffic jam. Only found out later that there had been two car accidents on the way to the old town, which partly explained the jam. Also it was Sunday and all the Croatians were converging on Dubrovnik.

Walked in to the old town and decided that £25 to walk the walls in the already blazing heat wasn’t going to happen. We’d walked the walls before and didn’t really feel the need to do it again. Maybe if they’d paid us the £25 we might have thought about it, but only maybe. We didn’t spend too long in the old town. Just long enough to see the statue of the man with the golden nose (?) and to have a drink by the harbour, then it was back to the long, long queue for the bus back to the ship. By long, long I really mean long, (x25) long queue. It seemed to stretch halfway back to the ship. I took the executive decision and stopped a taxi. €14 to the cruise terminal. Sounded good, then an American girl asked if she could share the taxi with us. We said ok, because it was a set price fare. She asked if she could contribute to the fare, but we had it all in hand, so she got a free ride to the cruise terminal which is also the ferry terminal. She got the free ride and we got to be good Samaritans. Ten minutes we were getting on the ship.

We’d seen the stylish boat moored next to ours and Scamp was the one who looked it up on her phone. It was called the Christina O and had originally been owned by Aristotle Onassis. It was named after his daughter. It’s had a chequered history which makes interesting reading. While we were admiring it from the balcony, its entire crew appeared and lined up on the deck. We were going out for a walk anyway, honest, so we did a slow walk past the yacht to see who of the great and the good got out of a black people carrier and after shaking hands with the crew, climbed the steps into the luxury that €630,000 per week to hire can give you. We walked on and bought a bottle of water at the ferry shop.

When we came back, I went for a snooze while Scamp went and read for a while on deck. She came back and told me there were people bungee jumping from the bridge. I took my camera and went to see what I could see. Luckily for me one bloke was getting ready to launch himself into oblivion. Got the camera ready and just as he jumped the viewfinder went black. The battery was dead. Just my luck. However I did watch this bloke plummet down until he almost touched the water 49m below. Rather him than me.

At dinner we were all discussing what we did in the real world. One wee girl of about 6 or 7 asked the man sitting across from her what he did. He said he was an astronaut. I don’t think I’ll ever forget the look on her face, or the disappointment when he started to laugh and told her he was just joking.

PoD was an island we saw as we were sailing away from Dubrovnik. It looked like something from a Peter Jackson film.

Tomorrow we’re going to be in Hvar, also in Croatia.