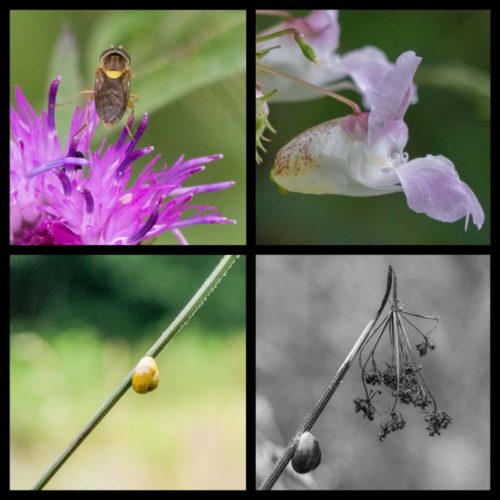 Went for a walk along the railway before dinner tonight and noticed that my plan to re-seed the banks of the burn with Himalayan Balsam last year had been successful.  The Himalayan Balsam was everywhere, as was the cowparsley and meadowsweet.  I so like the cowparsley.  It’s always a great place for insects, like the great big helicopter landing pad of the insect world.  Today I chased hoverflies of various stripes, and even some without stripes!  Thankfully I managed to catch one of them, even if it was from the rear.   However, it was the snails that were really the stars of the cowparsley.  You see, everyone wants in on the act with this versatile plant.  I’d plant some in the garden if Scamp would let me (fat chance there).

I don’t think tomorrow is spoken for yet, but Thursday and Friday are booked already.  How did I find the time to work, eh?

In the morning we drove to Linlithgow to get some fish at Oyster Oyster.  So it was sea bass for dinner tonight and probably herring in oatmeal for lunch tomorrow.  No fish fingers for dinner tomorrow though.  There’s plenty more fish in the sea and also in the freezer now too.