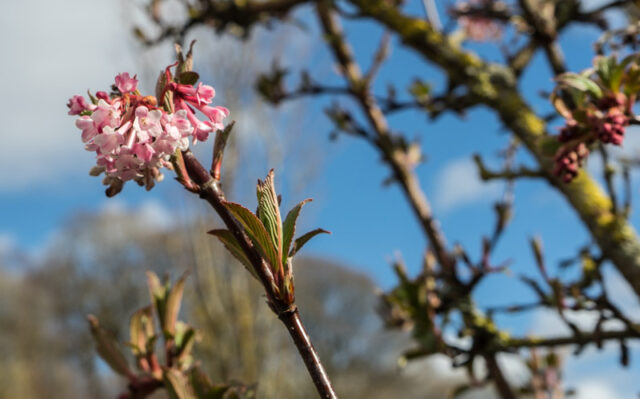 Up and out fairly early.

Had to get up and go out to get the makings of today’s dinner which would be Cod and Prawns with Fennel and White Wine. Sounds really posh, but is fairly easy to do, successfully. However, it does require Cod and Prawns as main constituents and I’d forgotten to get them yesterday. Also, pudding would be Panna cotta which really needs double cream and whole milk, also on the ‘forgotten’ list. So a quick run up to Tesco was in order. Because the ‘birthday girl’ enjoys the odd glass of Kraken dark rum, and because of a price reduction of the same in Tesco, it seemed the right thing to do to add a bottle to the list. Managed to curb my spending to those essentials, and drove home.

After a light lunch and with the panna cotta cooling, we headed off for a walk round the Broadwood Stadium, route, because the clouds were gathering and it would have been pushing our luck to go the full Broadwood Loch path. On the way there, we saw a young deer buck happily grazing by the side of the path. I grabbed half a dozen shots of it before it loped off a few yards than stood in open ground staring at us and looked like it was saying “are you still there?” Spoke to a couple who were walking the opposite direction and agreed that the animals seem to be less frightened of us humans. Probably a side effect of Covid because a lot more of us humans are invading the animals’ space. Not only heavy cloud, but also a cold wind when you were exposed to it might have encouraged us to walk that little bit faster round the Broadwood paths.

When we got home I thought I might have just enough time to go round St Mo’s a couple of times to augment my deer photos. I visited the ladybirds still hibernating in the woods and grabbed a few shots just to remind me of when I’d last seen them, because they will be leaving soon. Nothing else interesting poked its head out to see me.

Back home it was full tilt into prep for dinner. One thing I’ve learned from Scamp and from my one day at cookery school is mise en place, or ‘setting up’. I’ve tried to use it more and more in my recent cookery. Just getting everything at least ready, if not measured before I start. It saves time when the gas is turned on!

Starter tonight was Pizza Bread Bruschetta. Main was Cod and Prawns with Fennel and White Wine. Pudding was Panna Cotta with Raspberries. All worked out well and were deemed a success.

Hazel and Neil had organised a Zoom call tonight with Jamie and Simonne for the Birthday Girl. We had an enjoyable hour talking to them all. What a wonderful idea Zoom is. Not quite as good as face to face meeting, but better than a simple phone call. Great catchup you people. Thanks for organising it.

Well, that was a busy day. PoD was a photo I took of blossom on a fruit tree near Broadwood Stadium. Those who are observant will notice that the blog is now HTTPS after I eventually set up my security properly. I don’t think it will make any difference to your connection, but if it does, drop me a line. Tomorrow, relaxing I hope!