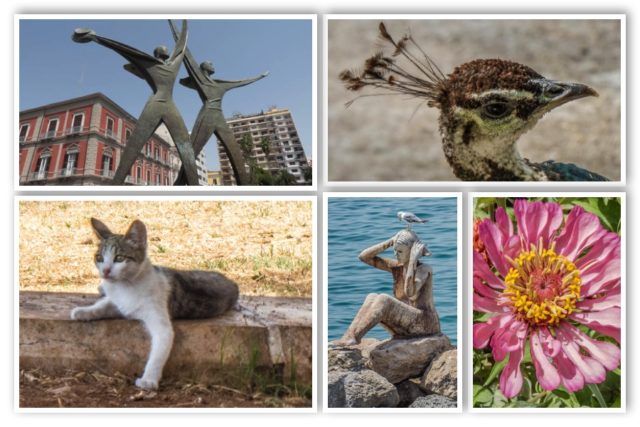 Today we were in Taranto, Italy. Not to be confused with Toronto, Canada.

There was a reception area outside the ship when we disembarked. That was new, we’d never had anything like that before. Maybe it was to prevent us wandering out into the maze of wind farm windmill blades stacked on the dock. It wasn’t quite clear if they were coming or going. Got a free ‘cooncil’ bus into Taranto from the ship’s berth. That was new too. Two girls were on the bus to act as guides and answer question. That’s an idea that made sense. The bus took us out of the docks area and along a very congested coast road to the town. Luckily there was a bus lane otherwise we might have been waiting in the queue still.

Immediately after we got off the bus, we were ushered towards the castle where we were offered a free tour, but I had seen something interesting from the bus and I wanted to investigate. We walked along the road we had just come in the bus, and there they were, two mermaids. Probably bigger than life size, although I’ve never actually seen a mermaid, and made from concrete. I have no idea the significance of these statues, but they made a fine perch for the seagulls.

When we walked back to the castle, and after photographing some strange double headed flowers, we decided to take up the offer of the free tour. The guide who wore some kind of uniform explained the history of the castle in a sort of broken English, but he spoke much better English than I could speak Italian. The tour was an interesting way to spend half an hour and as half of that time was inside the cool interior of the castle, it gave some shelter from the sun. We both decided that the free bus, the guides on the bus and the free trip round the castle showed a town that was beginning to see the opportunities of encouraging cruise customers. The area around the castle was one big traffic jam and the buildings were sorely in need of some TLC. However, the town seems to be trying to make the most of their scenic parts and we hope it works out for them.

We walked over the swing bridge which, luckily, wasn’t swinging at the time and sought refuge from the sun in Joyce’s Irish pub. It may have been in Italy, but the Guinness was pure Irish. We walked around Taranto and found a park, but it too had sun scorched grass and a sad wee couple of cages, one with peacocks and another with white doves.

We walked down the side of the canal and took some photos of the Monument to the Sailor. Then we went for ice cream and the bus back to the ship. 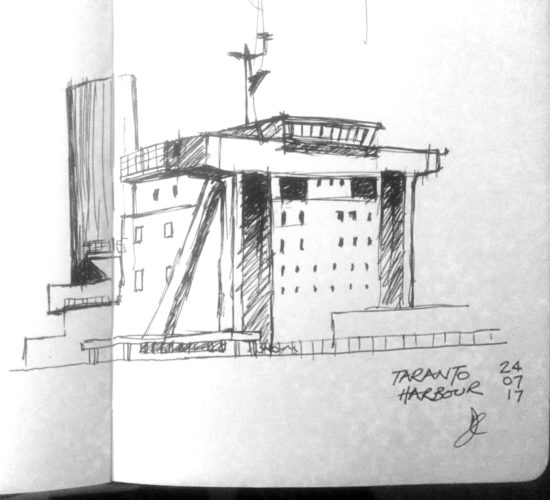 Another sketch done on the deck.  This time of an oil tanker bridge.